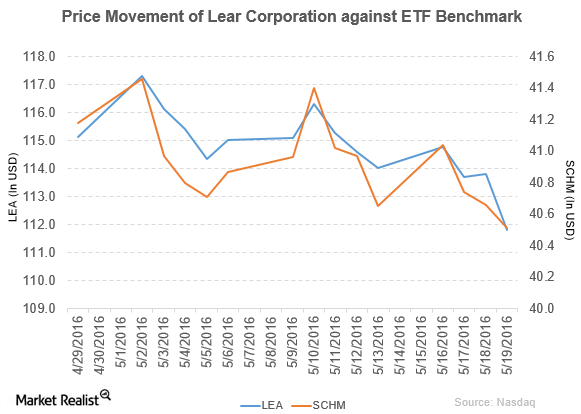 The Schwab US Mid-Cap ETF (SCHM) invests 0.34% of its holdings in Lear. SCHM tracks a market-cap-weighted index of mid-cap stocks in the D0w Jones US Total Stock Market Index. SCHM’s YTD price movement was 1.6% as of May 19, 2016.

The market caps of Lear’s competitors are as follows:

Lear Corporation declared a quarterly cash dividend of $0.30 per share on its common stock. The dividend will be paid on June 30, 2016, to shareholders of record at the close of business on June 10, 2016.

During fiscal 1Q16, it repurchased ~1.4 million shares of its common stock worth $155 million.

The company made the following projections for fiscal 2016:

In the next part, we’ll look at Church & Dwight.