In the recent past, Norfolk Southern Corporation (NSC) has focused on increasing its intermodal volumes and revenues. It anticipates an investment of $240 million in facilities and terminals, which include terminals and equipment to enhance capacity to its intermodal network, including corridors.

The company expects to spend $100 million on infrastructure improvement to increase its mainline capacity and committed share in the Crescent corridor and the CREATE (Chicago Region Environment and Transportation Efficiency) project. The proposed capital expenditure should boost the intermodal revenues that have a sizeable share in cash from operations. 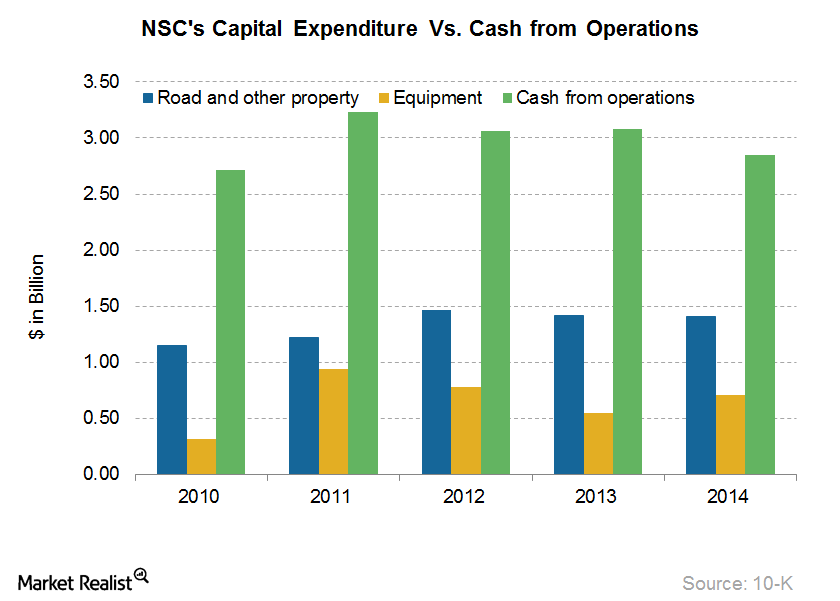 Norfolk Southern (NSC) expects $2.4 billion capital investments in 2015. This translates into a 13% increase over the previous year’s spending, which would be used in rail replacements, ballast, ties, and modernizing bridges. The company has planned $640 million in equipment spending, and it is expected to invest $852 million for locomotives and tracks.

NSC plans to invest in the Moorman Yard in Bellevue, the 51st Street Yard in Chicago, the Indiana Connection track, containers, and freight cars. It expects its investments related to Positive Train Control (or PTC) to touch $800 million after 2015, 50% of which is related to property purchase.