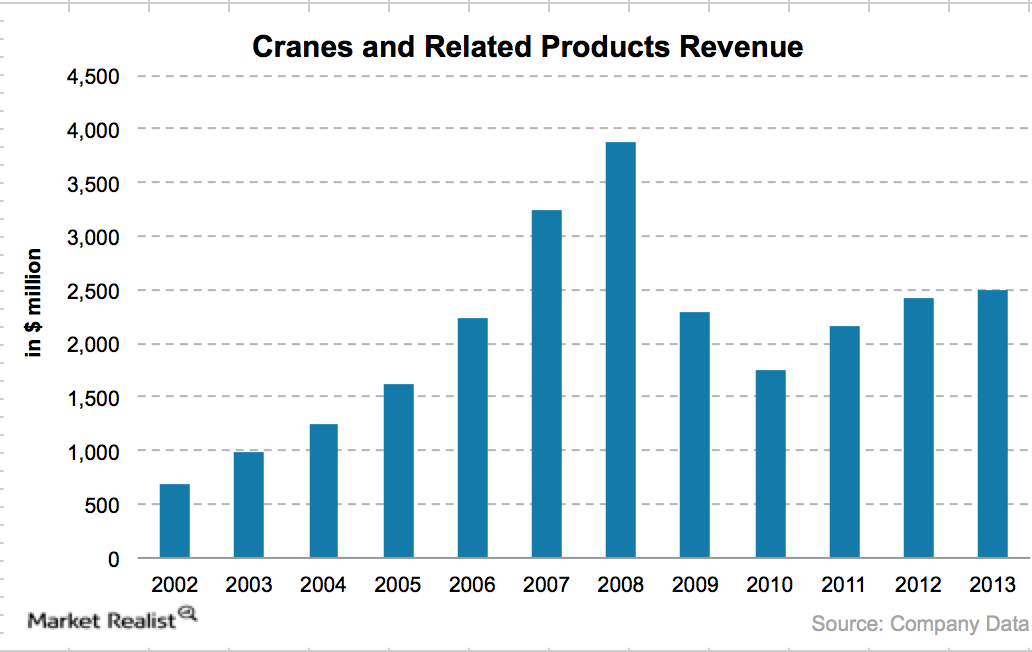 Manitowoc’s crane segment has 31 facilities in 16 countries. In 3Q14 the segment accounted for 58% of total revenue. The segment provides engineered lifting equipment for the global construction industry. These products include lattice-boom cranes, tower cranes, mobile telescopic cranes, and boom trucks.

Manitowoc mainly markets its crane products under the Manitowoc, Grove, Potain, National, Shuttlelift, and Crane Care brand names. These products find use in a wide variety of applications, including:

For 3Q14, net sales in Manitowoc’s crane segment were $569.2 million, 6.7% down compared to $610.2 million in the third quarter of 2013. The decline in sales was due to continued decline in the rough terrain and boom truck markets in North America and Latin America.

Crane segment operating margin for 3Q14 was 7.3% versus 9.7% for the third quarter of 2013. Third quarter 2014 margins were affected by lower sales volume that was only partially offset by ongoing operational efficiencies.

Crane segment backlog totaled $715.6 million, a 26% increase from 3Q13, but a slight decrease sequentially. Its 3Q14 orders of $557 million were 24% higher than in 3Q13. This represented a book-to-bill ratio of essentially 1.0x. Most of these orders are likely to be delivered in 4Q14.

Management said the company “remains focused on the areas of manufacturing initiatives and capturing purchasing savings. In addition, it will continue to drive cost-savings initiatives to mitigate weaker outlooks within select product categories and end markets.”

For fiscal year 2014, Manitowoc expects 5% to 9% year-over-year (or YoY) revenue decline in cranes with ~7% operating margin.

Cranes are a cyclical business

The demand for crane products is cyclical, as it depends on macroeconomic conditions and factors that influence construction activity internationally, nationally, or regionally. Currently, the crane business is facing challenges because the recovery in the crane market remains uncertain.

According to the latest data from the Commerce Department, US construction spending rose 1.1% in October to an annual rate of $970.9 billion. This is the biggest advance since May. The American Institute of Architects (or AIA) said that its November billings index was 50.9 in November.

AIA said, “the score indicates that while a majority of firms are still experiencing an increase in firm billings, there were fewer firms seeing this expansion in November than in October, when the score was 53.7.”

The AIA further noted, “as per the latest edition of the Federal Reserve’s Beige Book report, released in early December, construction and real estate activity generally expanded across the country in late October and November.”

Manitowoc and its industry peers

In the next part of the series, we’ll explore Manitowoc’s foodservice business.