As part of its Renew Blue cost reduction and gross profit optimization program, Best Buy (BBY) aims to reduce $400 million in costs over three years as of the end of fiscal 3Q16, which for Best Buy ended on October 31, 2015. As at the end of its fiscal 2Q16, the company brought down $100 million in annualized costs. However, these savings are expected to be offset by the incremental investments in the company’s growth initiatives. Such growth initiatives are expected to be ~$120 million in 2015. 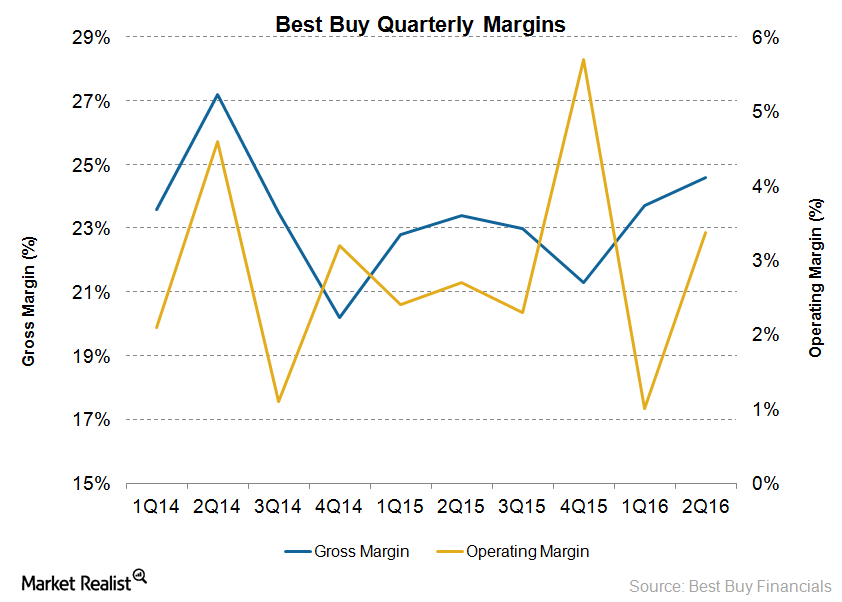 Margins in the previous quarter

Peers GameStop (GME) and Conn’s (CONN) reported operating margins of 2.9% and 9.1%, respectively, in their comparable second quarters. Aaron’s (AAN), which announced its third quarter results on October 30, reported an operating margin of 5.6% in 3Q15, which was up from 2.9% in 3Q14.

For its domestic segment, Best Buy expects the operating margin in fiscal 3Q16 to be flat compared to 3Q15, as any potential higher gross margin is expected to be offset by higher selling and SG&A (general and administrative) expenses. The company’s rise in SG&A expenses is expected to be caused by inflation and growth investments. The company expects its International Segment operating margin to come in between -2.5% and -3.5% due to the impact of Canadian brand consolidation and foreign currency fluctuations.

Continue to the next and final part of this series for a look at Best Buy’s online focus.