Apple’s earnings per share (or EPS) grew by 40% during the quarter. As the chart below shows, Apple expects its revenues to grow by ~26% on a year-over-year basis in fiscal 3Q15. 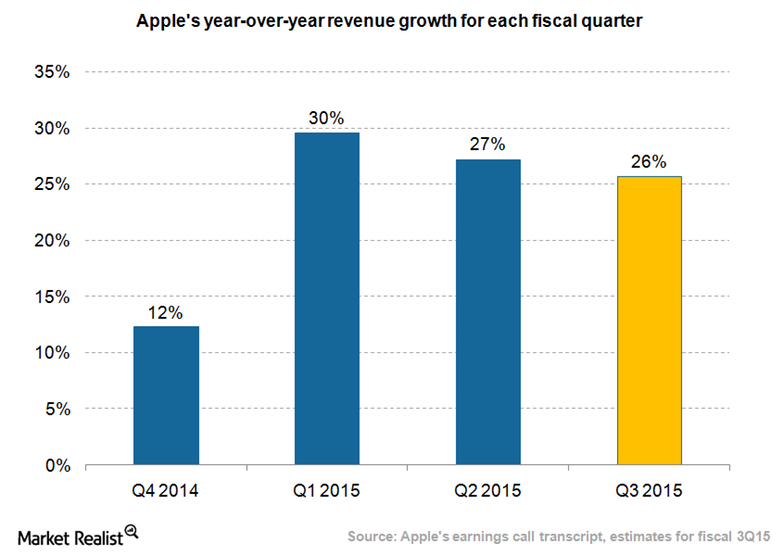 The Americas accounted for the largest percentage of Apple’s fiscal 2Q15 revenues, followed by Greater China and Europe. While the company’s year-over-year revenue growth in the Americas and Europe reached 19% and 12%, respectively, it was a whopping 71% in Greater China and 48% in the rest of Asia-Pacific. This clearly highlights the important role played by emerging markets, where the increasing affluence of the population drives them to purchase premium products such Apple’s smartphones and mobile devices.

As we discussed in Apple’s Fiscal 2Q15 Revenue Growth Driven by Emerging Markets, Apple achieved robust results despite the currency headwinds playing a major role. Apple noted that the strong dollar (UUP) impacted its revenue growth by 6% in fiscal 2Q15. Apple expects an even higher currency impact in fiscal 3Q15, when it expects its revenue growth to receive an 8% hit.

Just like Apple, the overall large-cap tech sector has been impacted by currency appreciation issues. Facebook (FB) announced its earnings on April 22 and noted that currency headwinds had a -7% impact on its revenue growth. Similarly, Amazon (AMZN) also announced its earnings on April 23, noting that currency issues impacted its year-over-year revenue growth by 7%.

Investors who wish to gain exposure to AAPL could invest in the iShares US Technology ETF (IYW) and the Technology Select Sector SPDR Fund (XLK), where the stock has exposures of 18.8% and 18.1%, respectively. Apple is also part of the PowerShares QQQ Trust (QQQ), with an exposure of 15.41%.

In the final part of this series, we’ll explore how ongoing innovation from Apple enables the company to deliver value to its customers and shareholders.