In the previous parts of this series, we looked at Denbury Resources’ (DNR) enterprise value and price-related ratios. In this part, we’ll look at Denbury’s debt-related ratios to find out how healthy the company is when it comes to debt.

Companies often use debt to fund growth. This helps them trim tax bills and boost returns to equity holders. But this debt also comes with interest and principal payments. If the investments for which debt was raised fail to generate enough cash for these expenses, it could lead to a company’s bankruptcy.

Since debtholders are given priority over equity holders, the latter are frequently wiped out in bankruptcies. So share prices also reflect any debt-related strain companies may be experiencing. 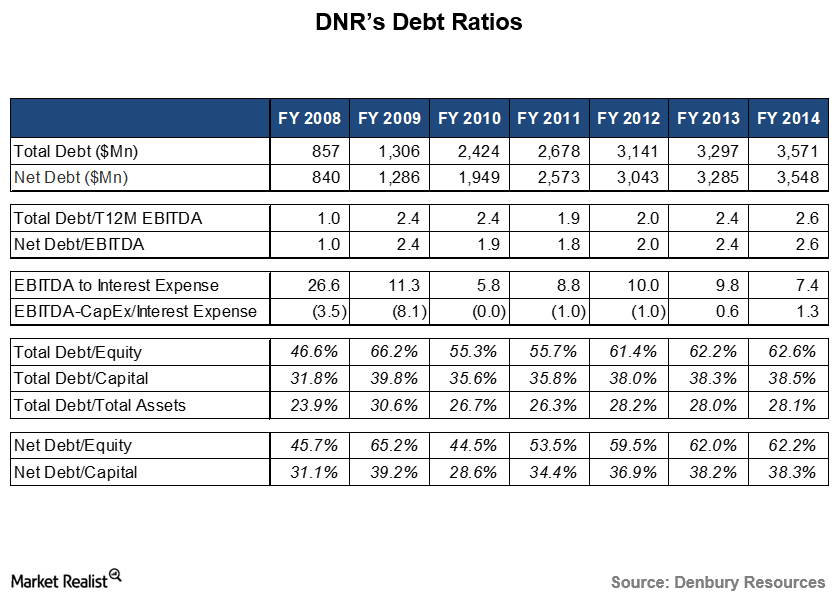 Denbury’s cash levels are negligible compared to its debt levels. Its total debt and net debt are very similar, making ratios for both also very similar. At the end of 2014, Denbury had a net debt of ~$3.5 billion.

In Denbury’s case, its debt has grown far faster than its earnings, measured here by EBITDA, that this capital should have generated. This means that EBITDA’s ability to cover interest payments has also been weakening. This is more evident when we conservatively remove capital expenditures from EBITDA.

This steady rise in Denbury’s debt can also be seen in its total and net debt ratios in terms of its equity, total capital, and assets. This is not something a company wants on its balance sheet when the price of its primary source of revenues, crude oil, has more than halved over the last nine months.

It’s no wonder, then, that Denbury’s stock has also more than halved during this period.