Pascal&#x2019;s pricing strategy at a glance

In the previous part of the series, we saw that NVIDIA (NVDA) launched its Pascal architecture, which delivers twice the performance of its predecessor Maxwell. This is because it shifted from Taiwan-based (EWT) TSMC’s (TSM) 28nm (nanometer) technology to 16nm FinFET (fin-shaped field effect transistor) technology, which delivers better performance while reducing the cost of manufacturing. 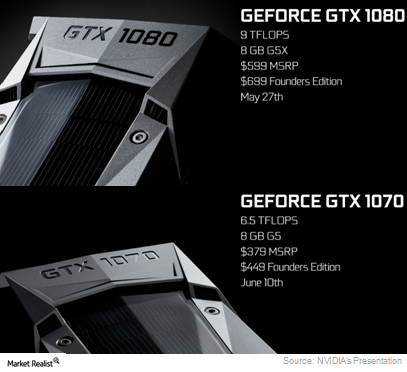 This raises the question of whether the two new Pascal GPUs are too expensive for gamers. Although NVIDIA has raised the prices of its GPUs (graphics processing units), the $50 increase doesn’t look expensive when performance is taken into account.

In the previous part of the series, we saw that NVIDIA launched its Pascal products. These products were the Founders editions, and they are priced higher.

NVIDIA designs only GPUs, and they are manufactured by third-party add-in board partners. The Founders edition is a reference to GPUs that have the actual suggested overall design by NVIDIA without any modifications from third-party manufacturers.

Rival AMD is launching a competing GPU, Polaris. If the two GPUs turn out to be equally competitive in terms of performance, price will become an important factor.

AMD has hinted that its Polaris GPU will target mainstream consumers moreso than high-end consumers, as a majority of its revenue comes from the former. There is ongoing speculation that Polaris GPUs may be priced at around $300.