As we discussed in the previous part of this series, analysts expect Cisco’s (CSCO) revenues to fall 1.4% year-over-year) in fiscal 2Q16, 0.6% in fiscal 3Q16, and 0.2% in fiscal 2016. Analysts also expect sales in fiscal 2017 to rise 3.7%. Cisco’s two main business segments are the Switches and Routers segments, which constitute almost 50% of total revenues.

In fiscal 1Q16, switch sales rose 5% year-over-year to $4 billion. However, router sales fell 8% to $1.8 billion, driven by weak demand from carriers. In China (FXI) and India (EPI), Cisco’s sales in the switching segment rose more than 40%. The company’s sales in the router space have fallen, driven by a consumer shift towards cloud solutions. In the long run, routing sales are expected to rise as Cisco increases its focus on security. 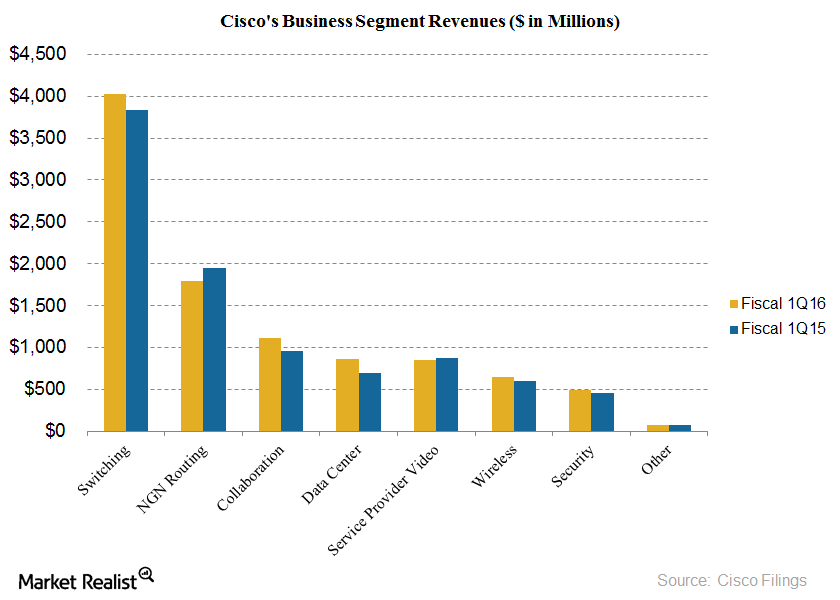 While Cisco’s router and switch businesses are the largest in the world, the company faces competition from rival Juniper Networks (JNPR). According to Synergy Research Group, Juniper’s revenues grew 28% year-over-year in 3Q15 and 24% in 3Q14 in the routing segment.

According to IDC, Cisco’s market share fell from 53% to 49% in the router market at the end of 3Q15. Cisco has a 61.6% market share in the ethernet switching segment. Juniper and Hewlett-Packard (HPE) have market shares of 6.5% and 9%, respectively, in this segment as of 3Q15.