Hewlett-Packard, a leading manufacturer of computers, printers, and storage devices, released its fiscal 4Q15 earnings on November 24, 2015. It’s the last time it will report earnings as the combined company of Hewlett-Packard (HPQ) and Hewlett-Packard Enterprise (HPE).

From fiscal 1Q16 on, the two companies will start reporting their earnings and guidance separately. Let’s take a look at the quarterly performance of the combined company, which we’ll refer to as HP. 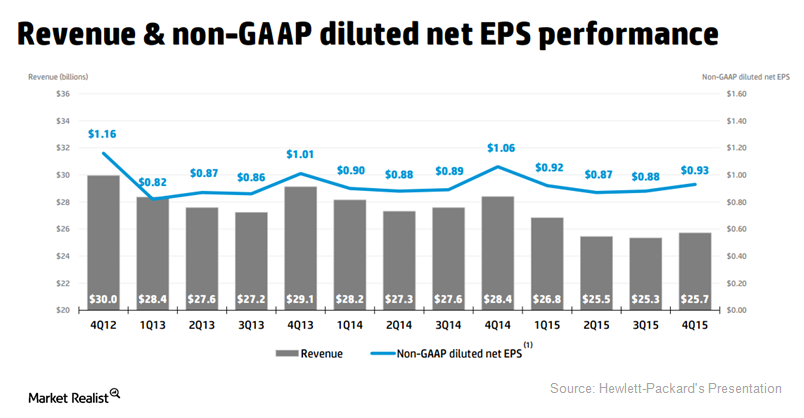 In fiscal 4Q15, HP’s revenue fell 9% YoY (year-over-year) to $25.7 billion, missing analysts’ estimate of $26.4 billion. Its non-GAAP (generally accepted accounting principles) EPS (earnings per share) fell ~12% YoY to $0.93, below analysts’ estimate of $0.97. The company’s revenue has been falling for the past five quarters, as it’s been hit by the slowdown in PC (personal computer) shipments and the enterprise shift to the cloud.

The company has almost completed its restructuring program started in 2012. During the entire duration of the program, the company slashed ~56,000 jobs, with ~4,300 jobs slashed in fiscal 4Q15. The combined company’s current employee strength is 59,000.

In fiscal 4Q15, the combined company generated $2.6 billion in cash from operating activities and spent $638 million on share buybacks and dividend payments. As of October 31, 2015, HP had total cash reserves of $17.4 billion.

HP completed the split of its PC and printer business with its enterprise business on November 1, 2015. A similar split was proposed by investor Elliott Management for EMC (EMC), which was considering a buyout from its own subsidiary VMWare (VMW) but was later acquired by Dell.