In the previous part of the series, we discussed how Cisco’s (CSCO) partnership with Ericsson (ERIC) could help Ericsson overcome the competitive pressures that exist in the wireless equipment market. However, Ericsson needs Cisco’s know-how in the networking market to develop cutting-edge technologies such as 5G technology, as that’s the sort of advancement that could drive the fast-growing market for connected devices. 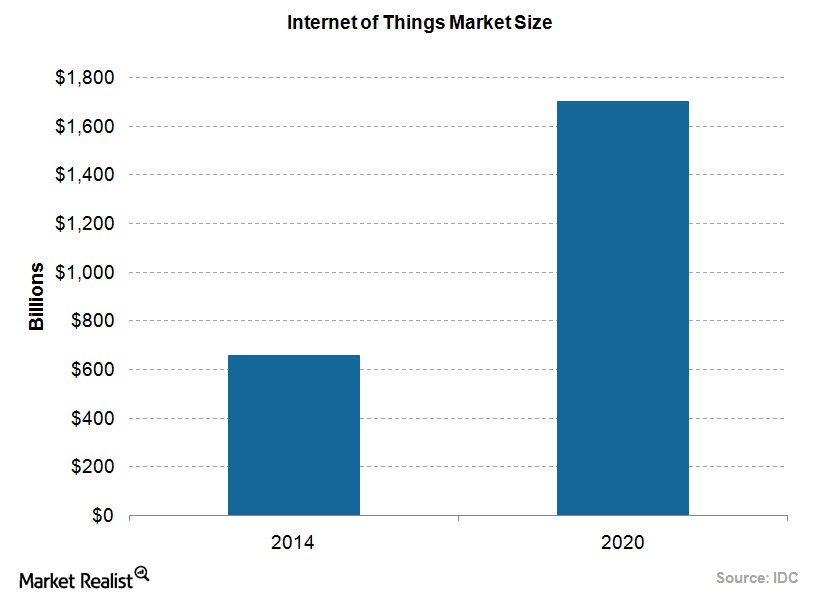 Connected devices fall under the broader term “Internet of Things,” or IoT for short. According to a report from IDC (International Data Corporation), and as the chart below shows, the IoT market is expected to grow from $655.8 billion in 2014 to $1.7 trillion in 2020 at a compounded annual growth rate (or CAGR) of 16.9%.

Nokia’s (NOK) acquisition of Alcatel-Lucent (ALU) has provided it with an opportunity to leverage the growing 4G LTE (Long Term Evolution) technology, especially in China (FXI). Alcatel-Lucent has gained presence in China and has even struck contracts with major Chinese telecom players, such as China Mobile (CHL), to sell its core routers. China is a good opportunity for networking players because it’s in the middle of rolling out its 4G LTW network.

According to a report from GSMA Intelligence, the total number of 4G LTE connections across the world should rise from 0.4 billion in 2014 to 2.5 billion in 2020. Hence, a deal with Cisco might be an attempt by Ericsson to counter the threat posed by Nokia’s acquisition of Alcatel.