CDK Global (CDK) has a market capitalization of $8.1 billion. CDK’s YTD (year-to-date) price movement was a mix of rises and falls in 2015. 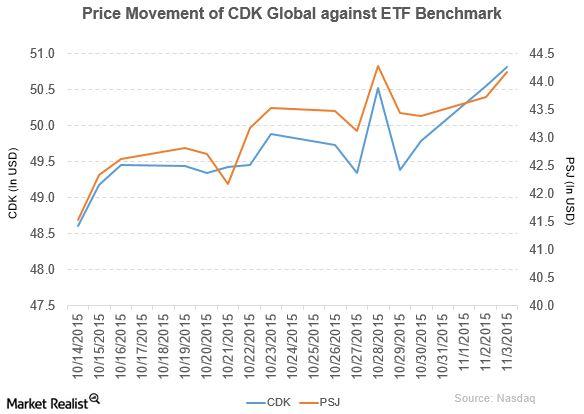 The PowerShares Dynamic Software ETF (PSJ) invests 2.6% of its holdings in CDK. The ETF uses a quantitative model to choose US software companies across the market capitalization spectrum. The YTD price movement of PSJ is 11.0%.

CDK Global’s competitors and their market capitalizations are:

Performance of CDK Global in 1Q16

CDK Global reported 1Q16 net revenue of $514.6 million, a rise of 2.3% when compared to its net revenue of $503.1 million in 4Q15. Adjusted revenue from its Automotive Retail North America and Digital Marketing segments rose by 0.81% and 5.4%, respectively, and adjusted revenue from its Automotive Retail International segment fell by 7.4%, respectively, in 1Q16.

In 1Q16, some of CDK’s key activities were as follows:

As per Al Nietzel, CDK’s chief financial officer, “We are confirming our full year forecasts, although we anticipate challenges in the second quarter due to continued pressure from unfavorable foreign exchange rates and year-over-year comparisons.”

The company has projected the following figures for fiscal 2016: