In the last three months leading into the earnings, Devon Energy’s stock price has increased by ~5% despite the ~12% decrease in crude oil (USO) (UWTI) (DWTI) prices during the same period. 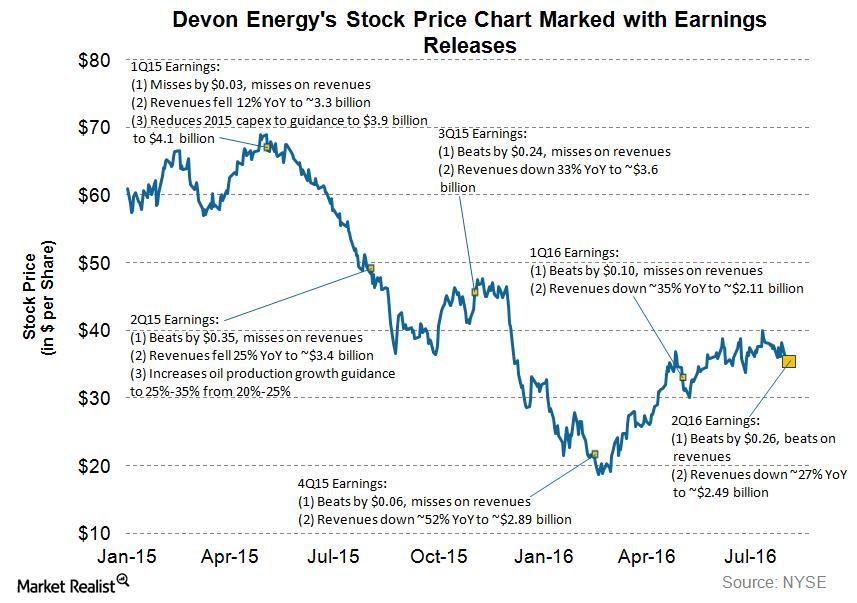 After losing ~77% of its market capitalization between June 2014 to February 2016, Devon Energy’s (DVN) stock price is finally showing signs of a new uptrend. In April 2016, Devon Energy’s stock crossed the 200-day moving average for the first time in the last one year and is currently trading ~12% above it. Since February 2016, the stock’s bottom price is up by a whopping ~102%.

DVN reported its 4Q15 earnings after the markets closed on February 16, 2015. In 4Q15, excluding the one-time items, DVN reported a profit of $0.77 per share, $0.06 better than the consensus of $0.71 per share. Following the earnings release, better-than-expected earnings saw Devon Energy’s stock price fall by ~14% in three sessions.

A contrarian reaction also occurred after 2Q15 earnings when Devon Energy’s stock price fell by ~25% in three weeks, even after beating the consensus earnings estimates by $0.35 per share.

DVN’s 3Q15 post-earnings reaction was positive with a ~6% increase in five sessions after beating the consensus earnings estimates by $0.24 per share. However, considering the magnitude of the beat, the reaction was muted.