July WTI (West Texas Intermediate) crude oil futures contracts trading on NYMEX (New York Mercantile Exchange) rose by 0.33% and settled at $49.17 per barrel on Thursday, June 2, 2016. Brent crude oil futures rose by 0.64% to close at $50.04 per barrel. US crude oil prices rose due to the decline in US crude oil inventories. Brent crude oil prices rose despite the failure of the OPEC meeting held on June 2, 2016, to reach an agreement on an output ceiling. The United States Oil ETF (USO) and the ProShares Ultra Bloomberg Crude Oil (UCO) fell 0.5% and 1.1%, respectively, on June 2. 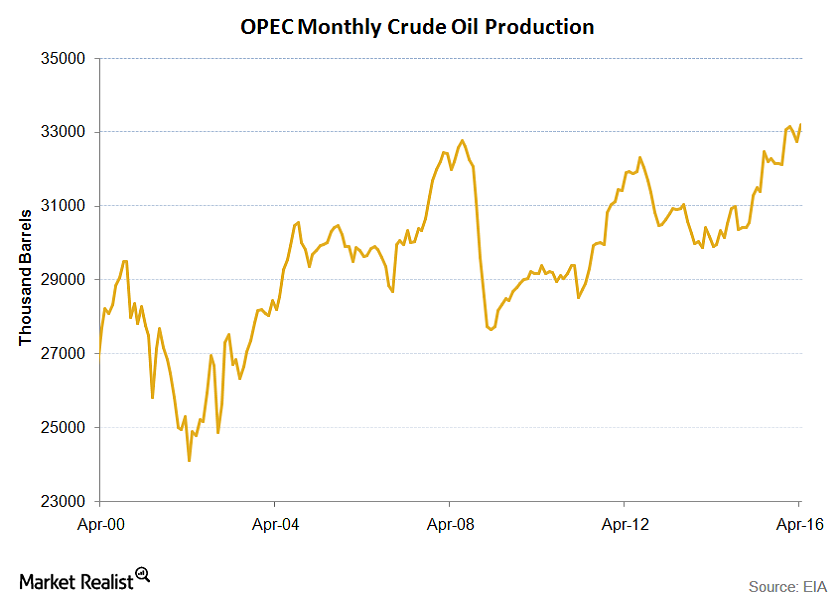 OPEC’s bi-annual meeting was held in Vienna on June 2, 2016. The OPEC members failed to reach an agreement on a collective output target. This means OPEC members could produce more to offset lower crude oil prices and meet their budget deficits. They could also produce more to compete with rivals like the US and Russia. However, some members are struggling due to lower oil prices, so some OPEC delegates hinted at a proposal to freeze the output to unify OPEC members and boost oil prices ahead of the OPEC meeting.

For more on OPEC’s meeting and oil prices, read How Did Crude Oil Prices React to the Last 3 OPEC Meetings? and OPEC’s Crude Oil Production and Strategy Ahead of Its Meeting.

Some OPEC members also said that because the oil market is rebalancing, an output ceiling wasn’t necessary. Crude oil prices are up more than 80% since the lows of February 2016.

Iran’s oil minister, Bijan Zanganeh, stated that Iran would target production of four MMbpd and won’t support any strategy to freeze the output. Read Iran: Boon or Bane for the Crude Oil Market in 2016? to learn more.

Saudi Arabia’s energy minister stated that Saudi Arabia’s role should be to produce more when there is a supply shortage and crude oil prices shoot up. It doesn’t propose a collective production target. Read What’s Saudi Arabia’s State of Mind before OPEC’s Meeting? to learn why.

In this series, we’ll cover US crude oil production and imports, refinery demand, and US gasoline and distillates prices and inventories. Let’s start by looking at US crude oil inventories in the next part of the series.