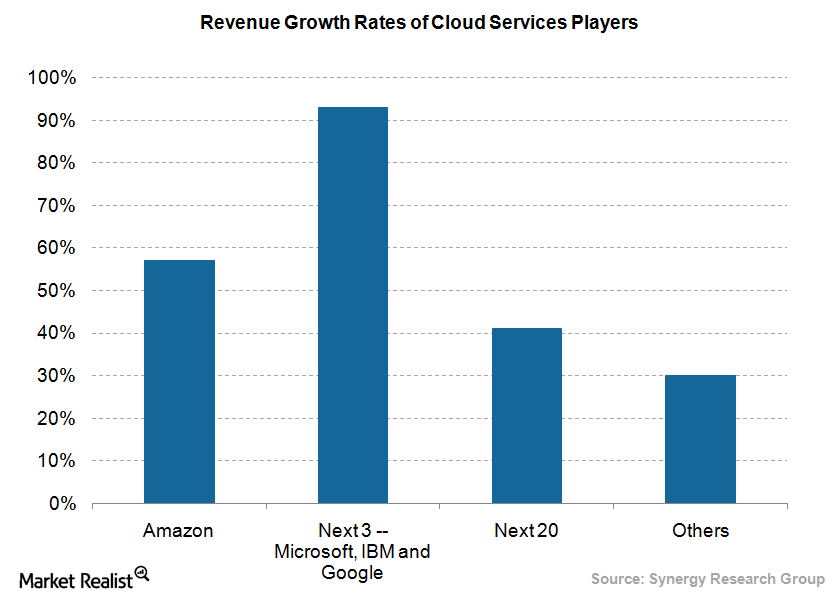 According to a report from Synergy Research Group, Amazon’s (AMZN) revenue in the cloud services space grew by 57% YoY (year-over-year) in 1Q16. The next three players, Microsoft (MSFT), IBM (IBM), and Google, grew at a rate of 93% during the same period.

However, the next 20 players, which include Alibaba Group Holding (BABA), CenturyLink (CTL), Hewlett Packard Enterprise (HPE), and Oracle (ORCL), grew by 41%. Although a growth rate of 41% is impressive, it’s still less than the overall cloud services market growth of 52%. This means that the top four players have gained market share over the last year.

The United States accounts for half of the cloud services market

Another trend we’re seeing is that the United States continues to account for almost half of the cloud and Internet data centers market, according to another report from Synergy Research Group. This is surprising considering demand for cloud services is worldwide. However, this situation could change as all the major cloud players plan to open a number of data centers in Europe and Asia.

In the next part of this series, we’ll discuss Alphabet’s capital expenditure on Google Fiber.