As shown in the below chart, Korea’s (EWY) Samsung (SSNLF) is one of the leading manufacturers of DRAM (dynamic random-access memory) chips with a market share of over 45%, followed by SK Hynix (HXSCF) and Micron (MU). Samsung is now looking to start manufacturing 18 nanometer (or nm) DRAM chips, which will help to reduce production costs and increase profitability. As seen in the earlier parts, DRAM prices fell approximately 50% in 2015. 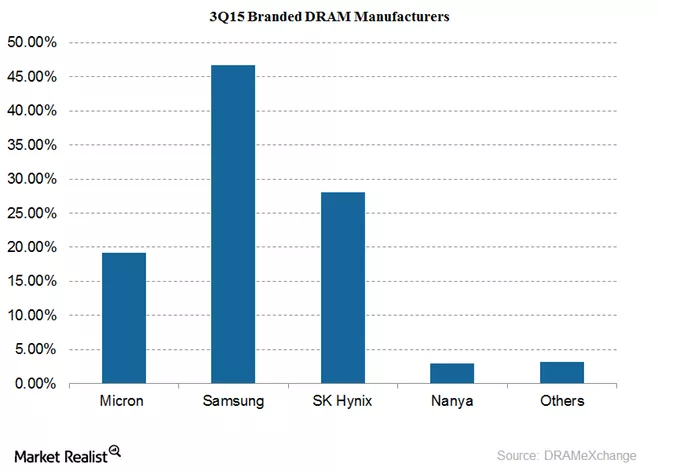 Samsung has reportedly completed the design and development of the chip and is expected to start production by the end of 1Q16, or 2Q16 at the latest. In 2014, Samsung was also the first to adopt the 20-nm chip technology and start mass production of the same.

Micron and SK Hynix are also focusing on the design and manufacture their own 18-nm chips. Even though their chips will hit the markets later this year, Samsung’s products will be available much earlier to customers.

Semiconductor giant Intel (INTC) is planning to invest $5.5 billion in the next few years to rebuild its old factory in Dalian, China (FXI). Intel will develop the much-anticipated 3D Xpoint Technology.

Samsung has started mass production of 3D-NAND flash memory and has gradually increased its market share in this segment. Sean Yang, DRAMeXchange’s research director, stated, “Though 3D-NAND Flash is expected to account for just 11% of the total NAND Flash output in the fourth quarter of 2015, the share will rise rapidly to 30% by the end of 2016. This, in turn, will lower the costs of SSDs, leading to an increase in the SSD adoption among OEM system vendors.”