India’s third quarter GDP (gross domestic product) released at 7.4% in the third quarter. This was the highest growth among major emerging economies. The industrial sector is expected to receive a boost from the rate cut by the Reserve Bank of India. Note that the sector witnessed a surge in manufacturing and a rise in output. 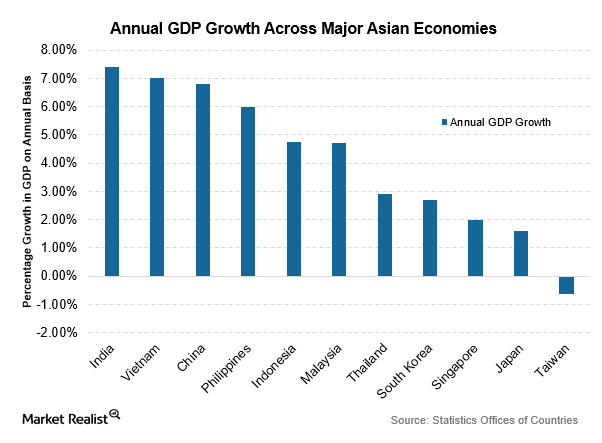 Improving economic metrics will be weighed against a delay in pro-business measures in India’s parliament to decide whether risk aversion will cause an outflow of investments from the country. However, looking at the emerging market basket, the Indian rupee is expected to outperform its peers in 2016.

Competitive devaluation is a risk for the rupee

The depreciation in the Chinese yuan in August 2015 and January 2016 also played its part. Asian currency peers take cues from their Chinese counterpart, and a continued depreciation by the People’s Bank of China in the yuan can cause further weakness in the rupee. The Indian currency is gradually crossing crucial long-term resistance levels that might surge the US dollar–Indian rupee pair toward the all-time high levels of 2013 as the rupee continues to weaken further in line with its Asian peers.

Investors were also trading on a cautious note, with uncertainty building up over the passage of key bills like the GST (goods and services tax) bill and the real estate bill in the country’s parliament.

Looking at the exchange traded funds affecting India, the WisdomTree India Earnings ETF (EPI) and the Vanguard FTSE Emerging Markets ETF (VWO) fell since the beginning of the year.

On the other hand, Indian ADRs (American depositary receipts) have also been on a falling trend. Looking at the software ADRs, Infosys Limited (INFY) has shown gains while Wipro Limited (WIT) fell in 2016 owing to the negative sentiment leading to capital outflows. Videocon D2H Ltd (VDTH) also has been trading on a broadly negative note.