In the preceding part of this series, we discussed eBay’s 4Q15 earnings highlights, its revenue drivers, and its outlook for 1Q16. In this part, let’s take a closer look at the company’s financials.

In 4Q15, eBay (EBAY) generated revenues of $2.3 billion, which is flat compared to 4Q14. As we discussed in our previous article, the company’s Marketplace division controls the majority of its online transactions, and this division’s growth declined by one percentage point. In turn, this impacted the company’s top line as well as its bottom line. For 4Q15, eBay reported a gross margin of 78.8% compared to 80.8% from the same quarter the previous year, which represents a decline of 2.0 percentage points. This decline came from the rising cost of revenues, the margin of which increased by 2.2 percentage points YoY (year-over-year).

The company’s 4Q15 operating expense margin came in at 50.3%, compared to 49.5% in 4Q14, which represents a marginal increase of 75 basis points. The majority of this increase came from the company’s general & administrative expenses. However, the costs incurred for sales and marketing and for product development declined during 4Q15. 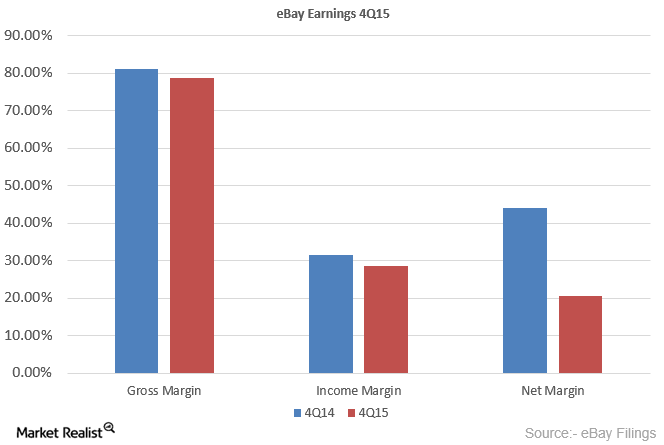 The rising cost and expenses had a negative impact on eBay’s income margin, which came in at just over 28.5% compared to the previous quarter of 31.5%, representing a decline of 3 percentage points. The company’s balance sheet reflects a long-term debt of $6.7 billion, for which eBay paid an interest of $12 million in 4Q15.

In 4Q15, eBay’s cash flows from operating activities came in at $1.1 billion compared to $838 million during the same quarter previous year, representing an increase of 34%. The majority of the company’s cash flows came from tax benefits and non-cash expenses. In 4Q15, eBay repurchased approximately $550 million of its own common stock, or 19.9 million shares, in order to make its EPS decline less severe.

Apart from this, eBay made a debt repayment of $600 million during 4Q15, which reflects net cash flows from financing activities of -$1.2 billion. Moreover, eBay’s free cash flows from continuing operations came in at $1.0 billion in 4Q15, compared to $638 million in 4Q14.

Continue to the next and final part of this series for our discussion of the latest analyst recommendations for eBay.