In this final part of our series on Newfield Exploration (NFX), we’ll compare the company’s stock movements to movements in the broader market, crude oil and natural gas prices, and the USDX (US Dollar Index). 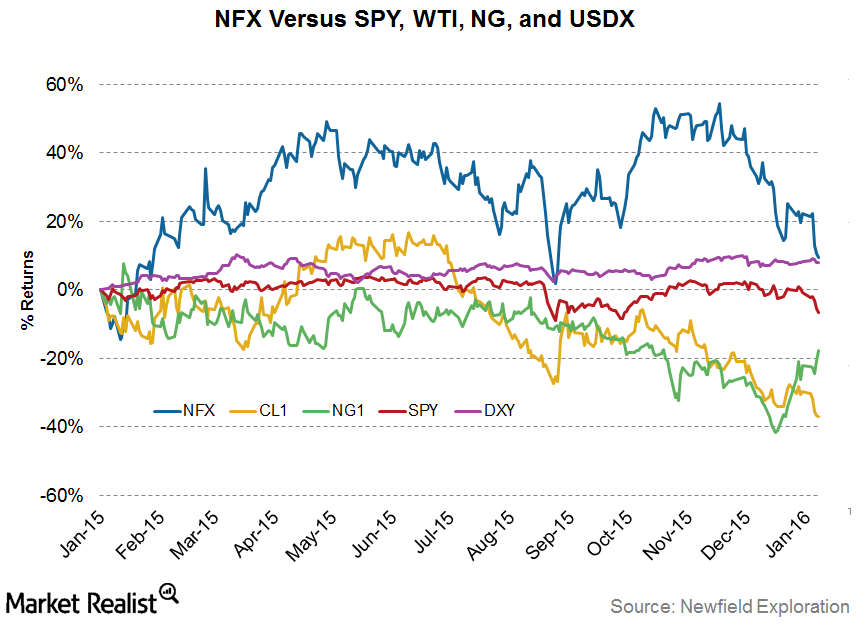 As we saw in the first part of this series, NFX’s stock has risen by nearly 10% year-over-year. Lately, the stock has been on a falling trend, mirroring crude oil price movements.

So, unlike many upstream companies, NFX’s stock performance hasn’t been significantly driven by crude or natural gas prices in 2015. This positive performance can be attributed to the market’s positive reaction to NFX’s efforts to strengthen its financial position, increase its focus on the Anadarko Basin, divest its non-core assets, and hedge a significant portion of its production uphill to 2017.

In the above graph, we can see that NFX has outperformed the S&P 500 ETF (SPY) as well.

On the other hand, many upstream companies, including Chesapeake Energy (CHK) and ConocoPhillips (COP), have taken hits due to weakening commodity prices. You can read a detailed overview of these companies at ConocoPhillips: The Investor’s Guide You’ve Been Waiting For and Will Chesapeake Energy Succumb to an Energy-Driven Debt Crisis? These companies make up ~4.4% of the Energy Select Sector SPDR ETF (XLE).

Thanks to its equity offerings, capex (capital expenditure) cuts, and hedges, Newfield Exploration has ample liquidity and a healthy balance sheet. It should be capable of weathering the turbulent energy price environment. Moreover, its debt is not due until 2020. Newfield Exploration could prove to be a good vehicle for riding out oil price recovery.