Generally, analysts look at net profits for automotive companies. Since Tesla (TSLA) is in its initial phase, the net profits probably aren’t a key metric that investors should follow. After all, from its own admissions, Tesla doesn’t expect to post positive net income on a GAAP (generally accepted accounting principles) basis before 2020. 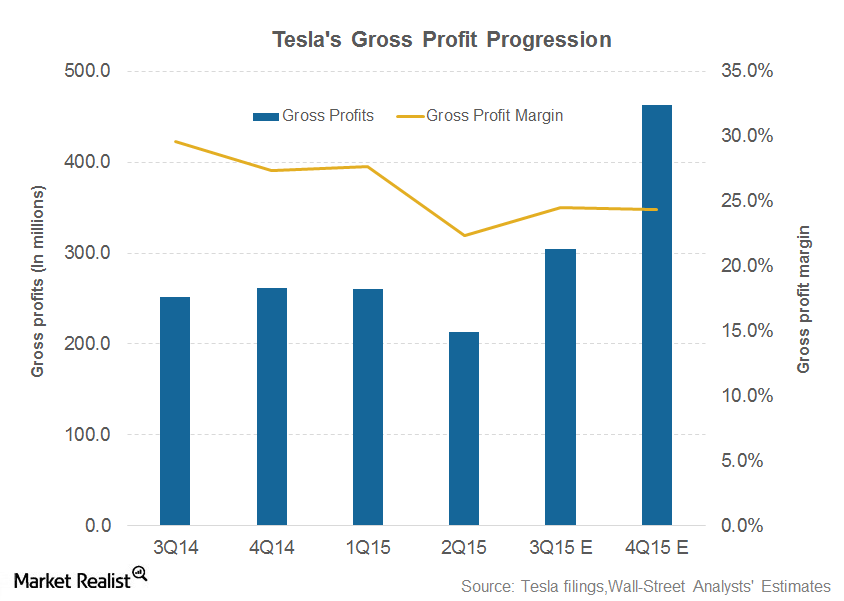 According to Reuters, Tesla lost $4,000 per Model-S in 2Q15. The calculation was based on Tesla’s reported operating loss in the quarter. Read An Investor’s Guide to Tesla Motors to explore why Reuters’ calculations don’t paint a true picture of Tesla. Currently, Tesla forms 0.54% of the PowerShares QQQ Trust, Series 1 ETF (QQQ).

In 2Q15, Tesla posted gross profits of $213 million at a margin of 22.3%. In its 2Q15 earnings conference call, Tesla’s CFO, Deepak Ahuja, said that Tesla’s 2Q15 gross margins were negatively impacted by a stronger dollar and the product mix. However, Ahuja expressed optimism that with the Model-X and Model-S combined, Tesla should be able to post a gross margin of “25% and better” in 2016. Based on the current estimates, analysts expect Tesla to post gross margins of 26.2% in 2016.