In fiscal 1Q16, Symantec’s (SYMC) Enterprise Security segment posted $482 million in revenue. This was a fall of 13% on a YoY (year-over-year) basis. Lower-than-expected demand in endpoint management, mail, and web security impacted the segment’s revenue growth. According to Gartner, this segment contributes ~53% towards Symantec’s total security software revenue. 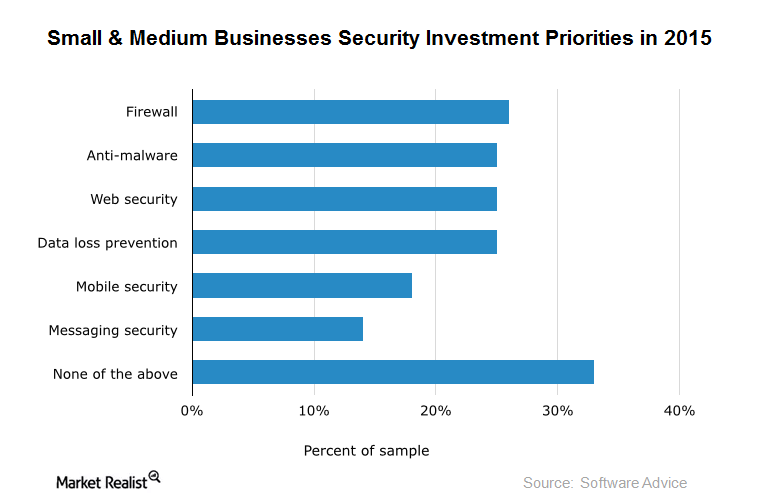 In 1Q16, Symantec launched DLP 14. It extends its on-premise DLP capabilities to cloud email and storage applications, like Box and Microsoft’s (MSFT) Office 365. It’s cybersecurity services revenue grew 2%–3%. IBM (IBM), its peer, has a somewhat similar agreement with Box and Dell with Dropbox.

As the above chart shows, DLP, web security, and anti-malware emerged as the top investment priorities for SMB (small and medium business) owners. DLP tools are becoming preferable. They prevent the unauthorized access and transfer of valuable information to computers outside a network. As a result, they minimize the risk.

Symantec claims that Trust Services is the world’s largest SSL certificate authentication provider with more than a 40% market share. It also posted 3% growth.

You can consider investing in the Technology Select Sector SPDR Fund (XLK) and the PowerShares QQQ Trust ETF (QQQ) to gain exposure to Symantec. XLK and QQQ invest about 0.41% and 0.32% of their holdings in Symantec, respectively.