On June 11, 2015, at a pre-E3 2015 conference event, Oculus VR unveiled its consumer version of “Oculus Rift,” a virtual reality headset. The E3 conference is an annual video game trade fair that serves as a platform for companies making major gaming-related announcements.

Oculus Rift will come equipped with a Microsoft (MSFT) wireless Xbox One controller, an Xbox wireless adapter, and a special motion sensor. The wireless adapter and controller enable the interface with a PC and are only compatible with Windows 10. The sensor is a desk-mounted tracking device that follows the headset’s movements and alters the first-person point-of-view in the game accordingly. 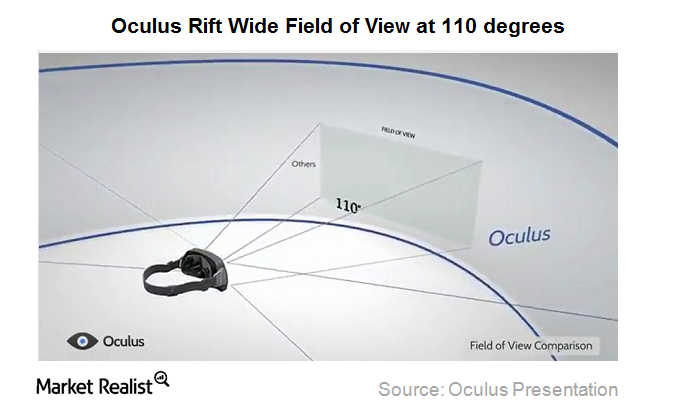 A key point to note here is that Oculus Rift is a PC accessory and not a standalone device. All three Oculus devices—headset, sensor, and controller—are connected to a Windows PC using USB and HDMI. USB (Universal Serial Bus- port) is one of the most common ways to connect a device to your computer. HDMI (High-Definition Multimedia Interface) is a display port for a laptop. It provides the good-quality display from your computer screen.

The PC runs an Oculus app to keep the devices working together. Now, you can play with dedicated Oculus games or stream Xbox One games.

Eyeing the augmented and virtual space

Alongside Microsoft and its Xbox One, Sony (SNE) and Nintendo (NTDOY) are the leading players in the gaming space.

The news from Oculus VR turned heads in the virtual and augmented reality space. Clearly, Microsoft and Facebook (FB), the owner of Oculus VR, are weighing up their chances in the sector.

Virtual reality, or VR, is an artificial environment generated by computer software and hardware. It’s so absorbing that it looks and feels like a real environment. Augmented reality, or AR, is a sort of virtual reality. AR is formed from the interaction of overlapping audio, graphics, and other sensory enhancements against a real-world environment displayed in real time.

Oculus VR is a virtual reality company that became a subsidiary of Facebook (FB) in 2014 when it was purchased for $2 billion. The firm developed the Oculus Rift VR headset, which works with mobile, PC, or computer.

With the pre-E3 announcement, Microsoft’s Xbox One head, Phil Spencer, said, “We believe we’ll be able to create a state of the art virtual reality experience with the Oculus Rift on top of Windows.”

Oculus Rift features include immersive stereoscopic 3D rendering and a massive field of view. As the graphic above shows, Rift’s 110 degrees field of view is much broader than the conventional VR headset that can offer ~40 degrees of periphery.

It also has plenty of HDMI and USB input ports and has a low-latency tracking that follows a user’s view with insignificant delay. Latency refers to the amount of time a device takes to communicate with another device. With these features, the Oculus Rift should significantly enhance the gaming experience, outperforming other VR headsets available in the market.

The VR segment is attracting the attention of leading players. During the E3 Conference, Samsung (SSNLF) announced plans to release a VR headset in 2015. A Valve–HTC partnership is also in the making.

If you’re bullish about Microsoft stock, you could invest in the Technology Select Sector SPDR Fund (XLK) and the PowerShares QQQ Trust, Series 1 (QQQ). XLK and QQQ respectively invest ~9.61% and 8% of their holdings in Microsoft.