Previously in this series, we discussed the progress update on Apple’s (AAPL) partnership with IBM (IBM), as well as Apple’s comfortable lead in the enterprise smartphone market. Apple also dominates the enterprise tablet market.

However, Apple’s position in this market has declined. iOS accounted for 81% of all tablet activations in 1Q15, down from 92% in 1Q14, according to a May 11 report from Good Technology. The main beneficiaries of this loss were Google’s (GOOG) Android and Microsoft’s (MSFT) Windows platforms.

As the chart below shows, Android’s share of all tablet activations in enterprises increased from 7% in 1Q14 to 15% in 1Q15. Meanwhile, Windows’ share increased from 1% to 4%. 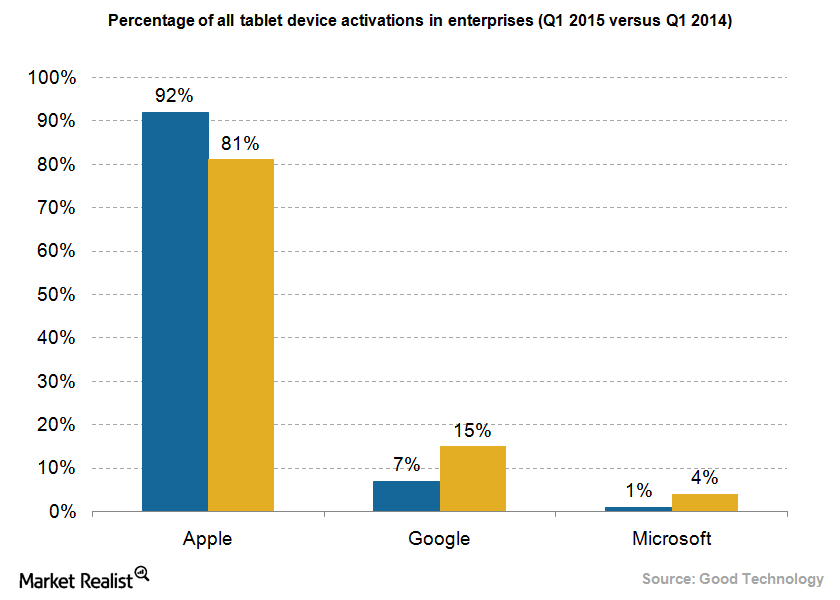 The decline in Apple’s share in the enterprise tablet market can be attributed to the cannibalization issues that we discussed previously in this series. However, Google’s Android has made good progress in this market, as it has improved its image of being an insecure player.

Security is the primary requirement for enterprise users. Google partnered with Samsung, announcing that future Android versions will be integrated with Samsung’s Knox technology to increase the security of all Android devices.

Earlier this spring, Google announced its partnership with BlackBerry (BBRY) to integrate Google’s Android for Work program with its BES12 mobile device management software. This move is an attempt by Google to improve the security aspect of its devices. For more on this, read Google Uses 1Q15 Earnings Call to Spotlight Android for Work.

Windows’ increase in market share can be attributed to its introduction of the 12-inch Surface Pro 3 tablet last year, as discussed in Part 2 of this series. To gain a diversified exposure of Apple, you could invest in the PowerShares QQQ Trust, Series 1 ETF (QQQ). QQQ invests 14.3% of its holdings in Apple.