Rig numbers of all types are down 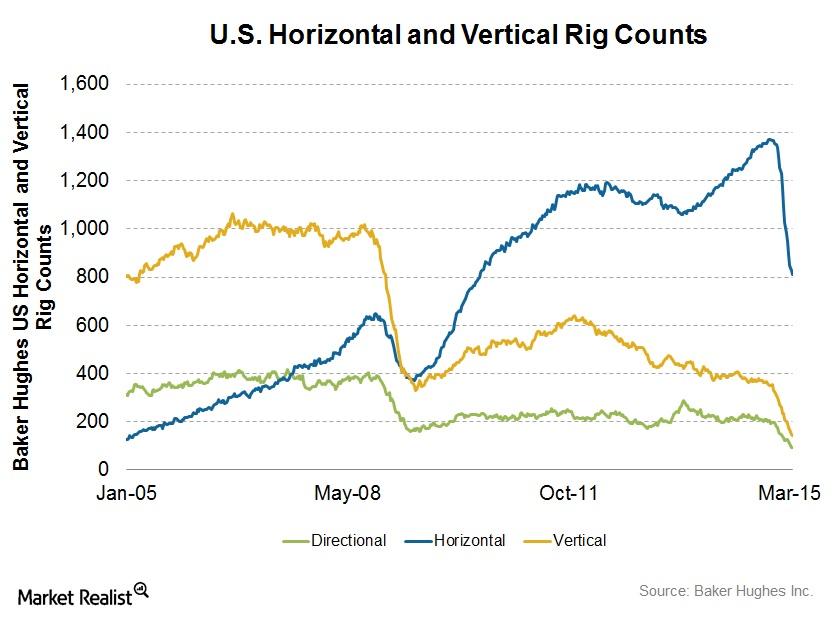 Oilfield service company Baker Hughes (BHI) notes that a horizontal well, or a directional well, has a surface that isn’t situated directly above the reservoir that it targets. A horizontal well’s inclination either is more than 80 degrees from vertical or the lower part of the well can run parallel to the pay zone along the reservoir.

Horizontal wells increase the length of the well that’s exposed to the reservoir, which increases production. In vertical drilling, a well goes straight down until it reaches the formation.

The number of horizontal rigs spiked in the United States when large quantities of oil and gas were discovered in shale formations. Oil companies combined hydraulic fracturing with horizontal drilling, which allowed them to increase oil and natural gas production by accessing unconventional oil and gas formations.

By the end of February 2015, the horizontal rig count had increased by ~201% compared to the number of rigs in January 2007. During the same period, the number of vertical rigs decreased by ~44%, indicating a long-term downward trend.

Upstream energy companies are trimming their spending plans for 2015, which may reduce shale oil and gas production. For more on this, read Is a crude oil price trend forcing energy companies to bite the bullet?

In the following part of this series, we’ll take a look at the US onshore rig count.