Gold is failing to rise on safe-haven calls as a volatile environment surfaces on all global markets. The gold futures price on COMEX New York slipped on Tuesday. After dropping 1.21% on Monday, it further fell by 0.43% on Tuesday, September 29. It closed at $1,126.8 per ounce. The drop may be the cause of a stronger dollar and the increasing certainty of a US interest rate hike by the end of the year. Gold futures had a trading range from $1,123.5 to $1,134 on the same day. Gold touched the high of $1,156.4 per ounce on September 24, but with the current slide in prices, it seems the rise was most likely transitory.

The overall commodities market rout seems to have a strong effect on precious metals, taking them down. Below is a price chart that shows the relationship of gold, a precious metal, and the S&P Goldman Sachs Commodity Index. 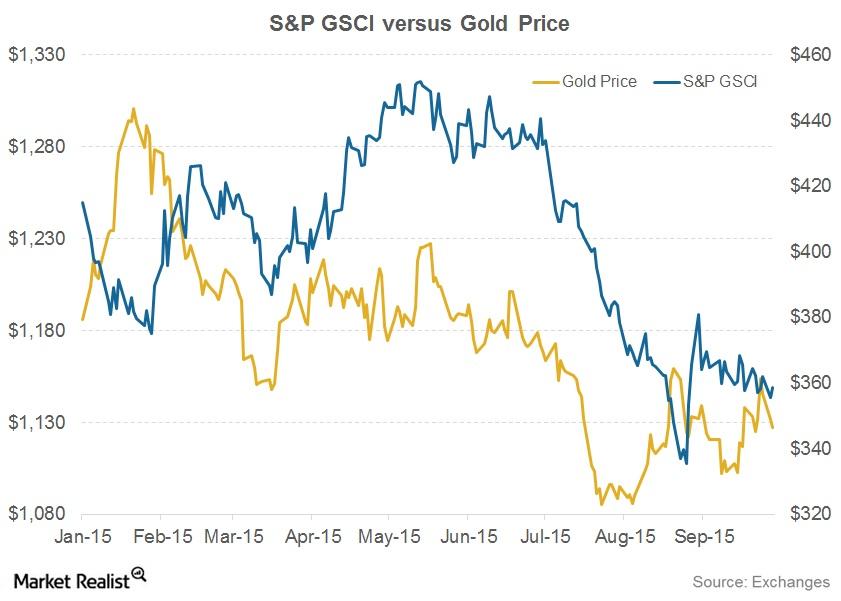 With Chinese industrial companies seeing profits fall 8.8% year-over-year in August, the sharpest decline in four years, the commodity markets seems to be facing a slump in one of the largest markets for precious metals. In US equities, the Dow Jones industrial average and S&P were down 1.7% and 2.2% as of Tuesday. The US Dollar Index (DXY) gained 0.17% on Tuesday. However, it has a five-day trailing loss of 0.06%.

As for other precious metals, Comex silver for December settlement fell by 3.79% to $14.530 per ounce. It traded in the range of $14.470–$15.110 as of Monday, September 28. Platinum on Tuesday dropped below $900 to hit its lowest since December 2008. Palladium, however, gained 00.9% on Tuesday after falling by 2.36%. The Volkswagen emissions scandal most likely drove near-term changes in platinum and palladium.

The ETFs that are affected by the sliding bullions include the Global X Silver Miners ETF (SIL) and the iShares Gold Trust (IAU). Other stocks that also follow the fall in precious metal prices include New Gold (NGD), Centerra Gold (CG), and Silver Wheaton (SLW). These stocks together make up 8.42% of the VanEck Vectors Gold Miners ETF (GDX).