Facebook’s (FB) CEO, Mark Zuckerberg, is often questioned about Facebook’s high-priced acquisition of WhatsApp, which generated revenue of only $20 million in 2013. However, this was a bold move.

WhatsApp is growing at a much faster pace, at 700 million users now from the 450 million at the time of its acquisition. It provides Facebook a larger user base. To date, Facebook has no monetization plans for WhatsApp, but it has a lot of options. Read more in Why Facebook will keep WhatsApp in investment mode until 2015.

One option could be to offer mobile payment solutions. The mobile payment industry is growing fast now, and Facebook can leverage this growth through messaging in this segment. According to BI Intelligence estimates, an extra $300 billion in US payments will be processed on mobile devices over the next four years. 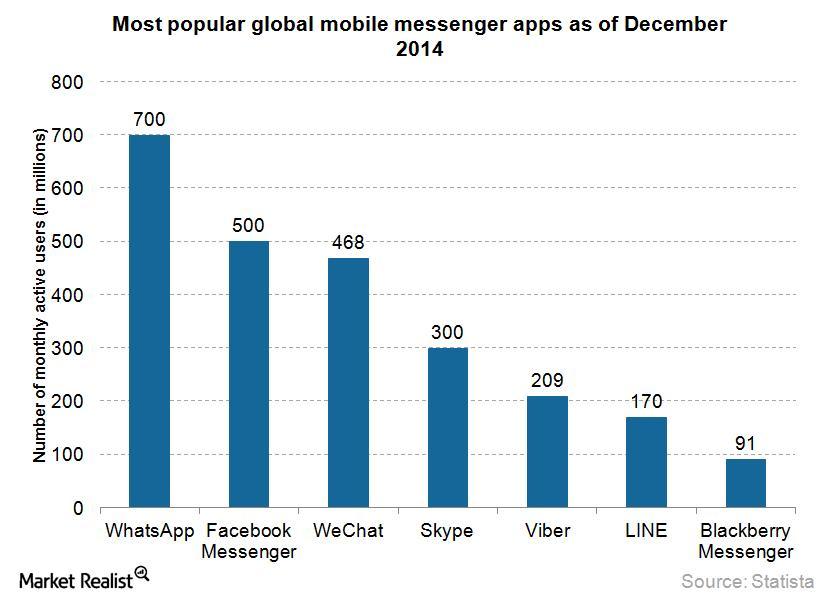 WhatsApp is on web browsers

The mobile messaging service app WhatsApp introduced a new feature on January 21, 2015. Users can access the app even on desktop devices or web browsers. As of now, this feature is only available on the Chrome browser. Also, presently, Apple users can’t access the app on the Safari browser due to Apple’s platform limitations. The web browser app will mirror conversations and messages from the mobile app.

Although Facebook’s (FB) WhatsApp is the leading messaging app with about 700 million monthly active users, Tencent Holding’s (TCEHY) WeChat, LINE, Snapchat, and Facebook Messenger are some other popular messaging apps.

According to a report from BI Intelligence, the four most popular messaging apps—WhatsApp, WeChat, LINE, and Facebook Messenger—will soon overtake the four most popular social networks—Facebook, Instagram, Twitter (TWTR), and LinkedIn (LNKD)—in terms of monthly active users. This is surprising, considering that the messaging apps business model is much newer. Read more in Market Realist’s Messaging apps are gaining more popularity than social networks.