Leading media conglomerate the Walt Disney Company (DIS) reported its earnings results for the first quarter of fiscal 2019 (which ended on December 31) on February 5, 2019. Disney’s Media Networks segment posted revenue growth of 7% YoY (year-over-year) to ~$6 billion in the quarter driven by a 12% YoY rise in its broadcasting business’s revenue and a 4% rise in its cable networks business’s revenue. 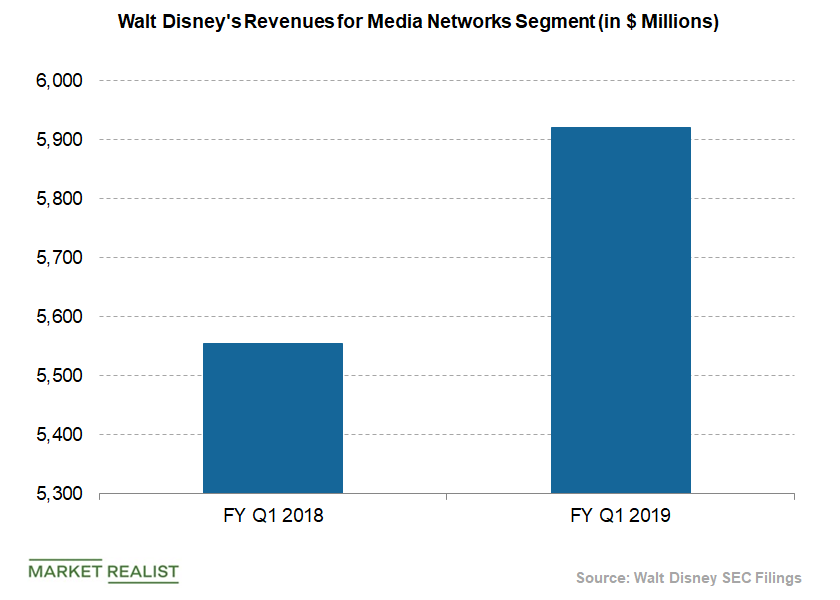 The cable networks business’s operating income fell 6% YoY in the first quarter due to sales decreases at ESPN and Freeform partially offset by higher sales from the Disney Channels. The decline in ESPN’s income resulted from higher content and marketing costs as well as higher technology-based investments related to the launch of ESPN+. Further, a rise in the contractual rate for sports programming and a shuffle in the College Football Playoff added to the increased costs.

The operating income in the broadcasting business rose ~40% YoY in the first quarter of fiscal 2019 driven by advertising revenue growth, higher program sales, and affiliate revenue growth. Higher revenues from licensed Hulu programs backed the increase in the business’s program sales. Its affiliate revenue also improved due to higher contractual rates. Its advertising revenue also rose due to higher network rates and an increase in political advertising at its owned TV stations. However, higher programming costs remained a drag.