Following Donald Trump’s win of the US election, IBM (IBM) is one of many prominent tech companies that could feel the brunt of Trumps’ proposed trade and tax policies. Let’s see how Trump’s proposed policies on trade barriers and tariffs will impact IBM’s labor and manufacturing.

According to Global Trade, Trump has called China a currency manipulator and proposed a 45% tariff on goods coming from China (FXI). IBM derives two-thirds of its revenue from outside the United States. It derives approximately 22% of its revenue from the Asia-Pacific region, which includes China.

If Trump implements his trade policies and initiates a trade war with China, tech players such as IBM, Microsoft (MSFT), and Apple (AAPL) will face a significant threat due to their dependence on China. Trump’s protectionist trade policy, international exposure, and immigration reform are some of the factors expected to impact IBM. 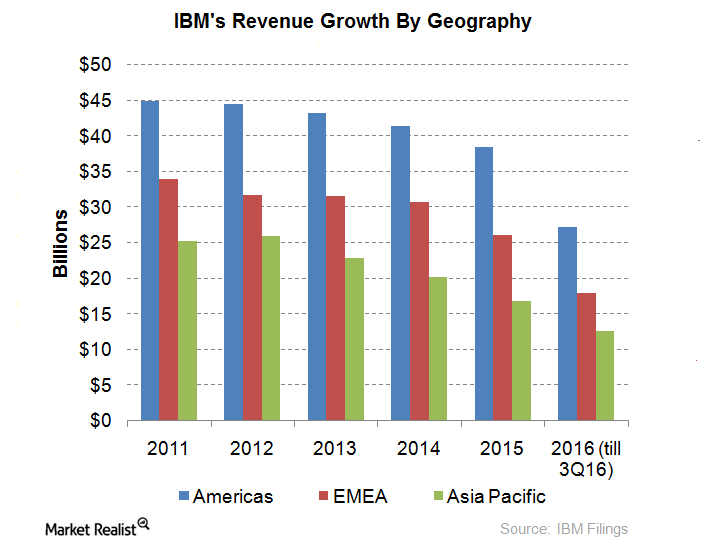 Trump’s protectionary policies, spending on infrastructure construction, tax reduction, the Fed’s rate hike, and improvement in the job market point to faster inflation in the United States in the future. Higher interest rates will strengthen the US dollar (UUP).

Some optimism in the market is evident through the US dollar, which reached a 14-year high in November and December 2016. The dollar is expected to remain strong in the near future, which could impact the revenue of several tech companies, including IBM. Oracle (ORCL), Apple (AAPL), Microsoft (MSFT), IBM, Alphabet (GOOG), and Cisco Systems (CSCO) derive the majority of their revenue from outside the United States.

Though the tech sector’s international exposure makes it vulnerable to Trump’s policies, his proposal to reduce tax on overseas cash would benefit technology companies as it would lead to cash repatriation and provide them with the flexibility to fund their growth by investing in R&D (research and development). Moreover, they will also be able to return cash to shareholders through stock buybacks and dividends.