In the previous part of this series, we discussed how Apple’s (AAPL) recent release of its iPhone 7 could help Sprint (S) and T-Mobile (TMUS) gain postpaid phone subscribers. However, it could also mean an increase in churn rates for all telecom providers because many customers will likely change their carriers to opt for the best wireless plan.

Remember, an increase in churn rate is negative for telecom companies because they have to deal with additional acquisition costs associated with customers, which have a negative impact on companies’ operating margins. 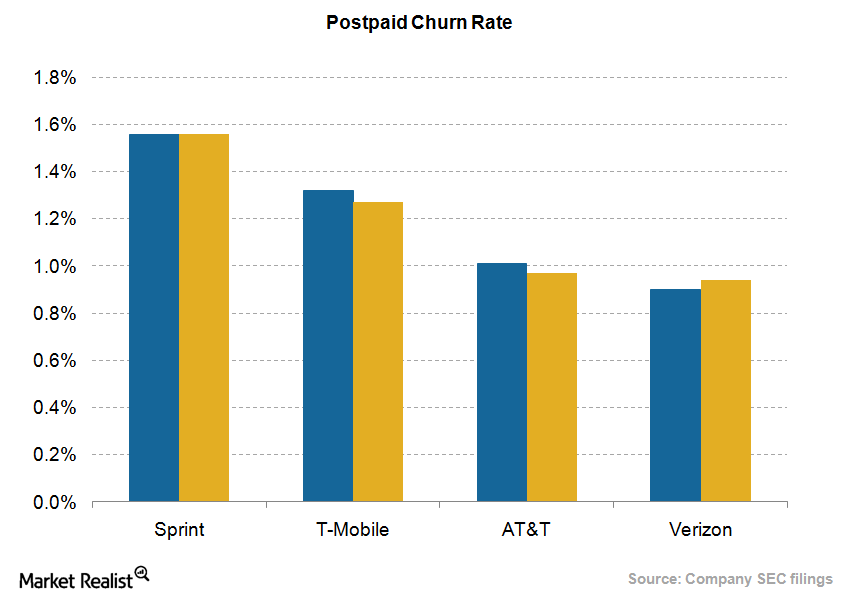 Postpaid churn rates for telecom companies have declined during the past year, except for Verizon Communications (VZ). Verizon still has the best churn rates in the industry at around 0.94%. AT&T (T), T-Mobile, and Sprint have higher churn rates of 0.97%, 1.27%, and 1.56%, respectively.

The fall in churn rates could be attributed to the trend wherein customers are holding onto their smartphones for longer without the need to upgrade. Another factor driving the fall in churn is the increase in BYOD (bring-your-own-device) concept, wherein customers bring their own devices to a plan rather than upgrading them with a telecom company.

Such a trend has impacted the revenues that telecom companies earn by selling devices. Verizon’s Equipment segment revenues, for example, fell from $3.9 billion in 2Q15 to $3.7 billion in 2Q16, while AT&T’s revenues from this segment fell from $3.2 billion to $3.0 billion during the same period.

Continue to the next part for a look at AT&T’s and Sprint’s new technological improvements.