The EV-to-EBITDA (enterprise value to earnings before interest, tax, depreciation, and amortization) valuation multiple is a good measure for capital-intensive industries. It helps investors compare companies with various capital structures. 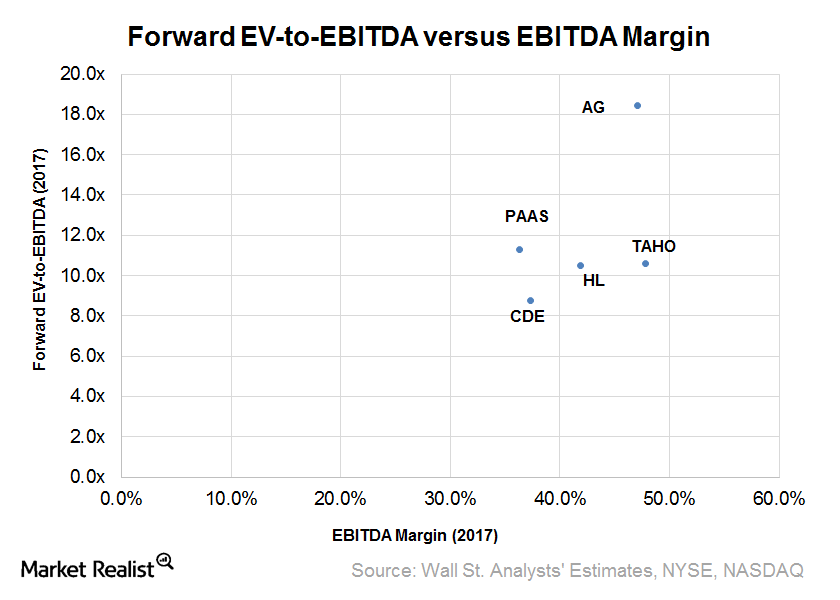 Coeur’s low EV-to-EBITDA multiple is probably due to its higher-than-average all-in sustaining costs and concerns regarding production falls in the medium term. As you can see in the above graph, Coeur’s EBITDA margin is only higher than PAAS. This is mainly due to higher costs, which results in a lower valuation multiple.

There has been a huge upward revision in Coeur’s EBITDA estimates since the start of the year. It comes on the back of firmer precious metal prices as well as Coeur’s cost-cutting efforts.

Mining rates from Independencia will accelerate to 1,000 tpd (tons per day) by the end of the year. By mid-2017, the daily underground mining rates should reach a combined 4,000 tpd from higher-grade and higher-margin deposits, resulting in lower costs. Any positive revision to guidance by management in 3Q16 could lead to a stock rerating.