Leading snack food and beverage company PepsiCo (PEP) is scheduled to report its 2Q16 results on July 7. Fiscal 2Q16 ended on June 11, 2016. PepsiCo’s revenue fell by 2.9% in 1Q16, marking the sixth straight quarter of revenue decline. For 2Q16, analysts expect PepsiCo’s revenue to fall by 3.5% to $15.4 billion primarily due to the impact of currency headwinds. 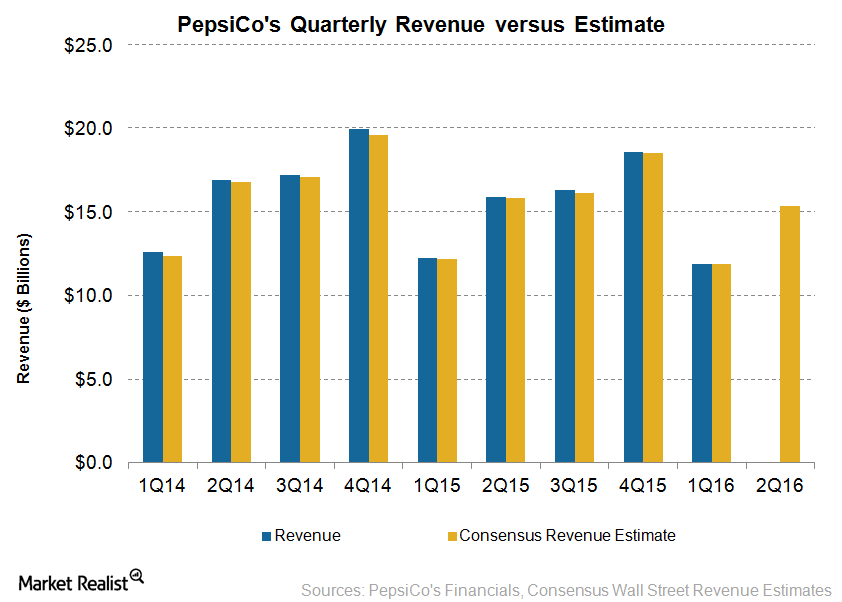 In 1Q16, which ended March 19, PepsiCo’s revenue fell due to currency headwinds of 4.5 percentage points. The company’s revenue was also dragged down by a two percentage point unfavorable impact related to the deconsolidation of its Venezuelan operations. These adverse factors offset a rise in volumes and higher net pricing in PepsiCo’s key markets.

Rival Coca-Cola (KO) reported a 4% decline in its 1Q16 revenue due to adverse currency fluctuations and structural headwinds. Dr Pepper Snapple’s (DPS) sales in 1Q16 grew by 2.5%, driven by a favorable product and package mix, higher pricing, and sales volumes. Monster Beverage (MNST) reported a 15.9% growth in its 1Q16 comparable sales driven by higher sales of Monster Energy brand drinks. The company also benefitted from net sales of $58.5 million from the addition of strategic brands that were added to its portfolio under a deal with Coca-Cola.

In May 2016, PepsiCo reaffirmed its fiscal 2016 guidance. PepsiCo expects its fiscal 2016 organic revenue to grow by 4%. This estimate excludes the impact of the 53rd week, which is expected to contribute approximately one percentage point to reported net revenue growth in fiscal 2016. The company expects currency headwinds to negatively impact reported net revenue growth by four percentage points.

In the next part of this series, we’ll discuss the company’s efforts to revive its soda sales.