According to Wall Street analysts, NextEra Energy (NEE) has the potential to rise by 8% during the next year. NEE has a target price of $137, compared with its current price of $127 on July 27, 2016. 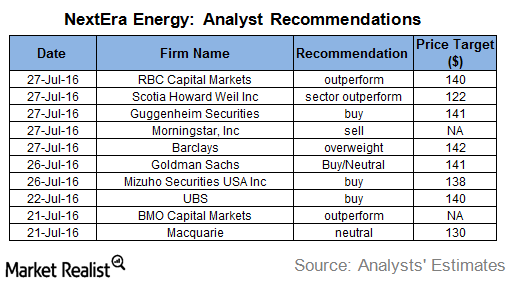 NextEra Energy: In the long term

NextEra Energy continued its healthy performance in 2Q16. Its strong regulated operations and sturdy renewables portfolio bode well for its long-term growth. Both factors have supported earnings, which have risen at a CAGR (compound annual growth rate) of 8% in the past ten years. NextEra knows its strength and it is rightly fortifying its clean energy portfolio.

Slower global economic growth may postpone an interest rate hike by the Fed for even longer. This may better position US utility giants for more merger and acquisition opportunities.

NextEra Energy’s projected upside of 8% even after solid returns in the last six months is likely to create an attractive case for conservative investors, especially when other large US utilities are forecast to have flat to negative price returns.