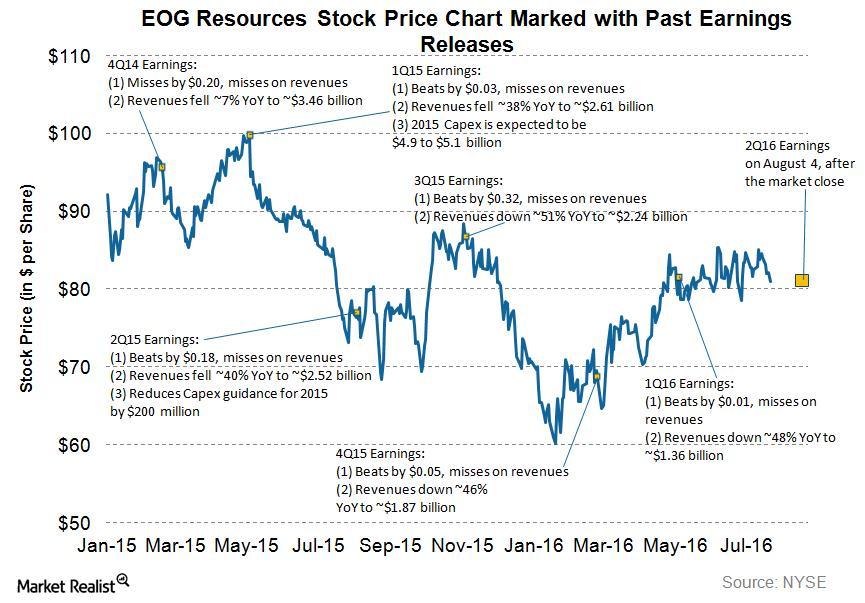 Recently, EOG has shown relative strength when compared with other crude oil (USO) and natural gas (UNG) producers. In the last three months, EOG Resources’ stock price has increased by ~2%, whereas the SPDR S&P Oil and Gas Exploration & Production ETF (XOP) has remained almost flat during the same period.

EOG reported its 4Q15 earnings after the market closed on February 25, 2016. In 4Q15, excluding one-time items, EOG reported EPS of -$0.27, $0.05 better than the estimated EPS of -$0.32. Following the earnings release, despite its better-than-expected earnings, EOG Resources’ stock price decreased by ~5% in three sessions.

For 3Q15 earnings, excluding one-time items, EOG reported EPS of $0.02, $0.32 better than the estimated EPS of -$0.30 per share. Following the earnings release, despite the huge beat on earnings, EOG’s stock price decreased by ~6% in five sessions.

A similar contrarian reaction was observed after the 2Q15 and 1Q15 earnings releases, when EOG’s stock price decreased by ~4% in one session and ~11%  in 12 sessions, respectively. In 2Q15 and 1Q15, EOG beat earnings estimates by $0.18 per share and $0.03 per share, respectively. EOG’s 4Q14 post-results reaction was also negative, mainly due to worse-than-expected earnings.