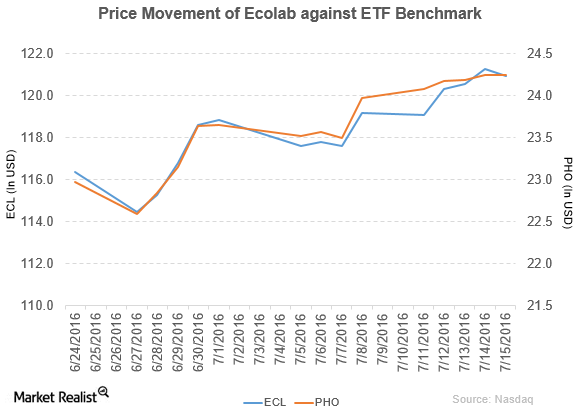 The PowerShares Water Resource Portfolio (PHO) invests 7.5% of its holdings in Ecolab. The ETF tracks a modified, liquidity-weighted index of US-listed companies that create products to conserve and purify water. The YTD price movement of PHO was 12.0% on July 15.

The market caps of Ecolab’s competitors are as follows:

In a press release on July 15, 2016, Ecolab stated the following: “Ecolab Inc., the parent company of Nalco Water, has made a minority equity investment in Aquatech International. Aquatech also provides a suite of industry-leading technologies for the reuse and recycling of water in the most demanding of industrial settings.”

It also noted, “Through this relationship, Nalco Water, a global leader in industrial water treatment solutions and services, increases its leading capabilities to provide customers with comprehensive end-to-end solutions to minimize net water usage and maximize process performance and productivity.”

In the next part of this series, we’ll discuss the Coca-Cola Company (KO).