According to Wall Street analysts’ estimates, Duke Energy (DUK) has a median price target of $84.30—compared to its current market price of $86.50. This implies an estimated downside of nearly 3% in one year. 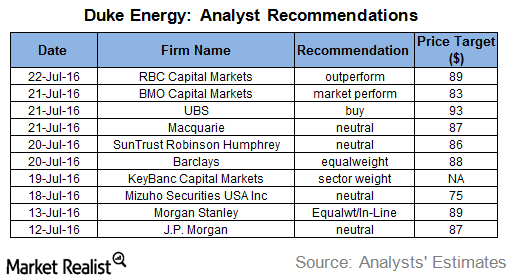 Duke Energy follows an industry average earnings growth rate of 4%–6% in the long term. Its increasing investments in gas distribution and midstream will likely have a positive impact on its earnings.  It already owns stakes in regulated pipelines like Atlantic Coast and Sabal Trail. Exiting the Latin American Generation business wouldn’t just peel away its weaker Merchant Power segment, but its sales proceedings should fortify its Regulated segment. Also, Duke’s management is confident about this sale at a reasonable valuation.

Duke Energy is one of the better-yielding utilities in the sector with stronger income growth and relatively lower risk. It yields around 4% while its expected dividend growth rate is just below 4%. Given its focus on regulated and midstream segments, volatility in Duke’s earnings might reduce in the long term and could translate into healthier dividends.