After downgrading Tyson Foods (TSN) stock to “market perform” from “outperform,” BMO Capital Markets acknowledged some hesitancy regarding its downgrade. BMO still believes Tyson Foods could continue to exceed expectations. It also believes the Market could increase its valuation of Tyson, which would reflect its earnings power. This would come mainly from the transformation of the company’s chicken segment, recovery in beef segment margins, and better performance in the prepared foods segment, as per Tyson management’s updated guidance.

Let’s look next at Wall Street’s and the company’s expectations for fiscal 2016. We’ll also take a look at Tyson’s valuation. 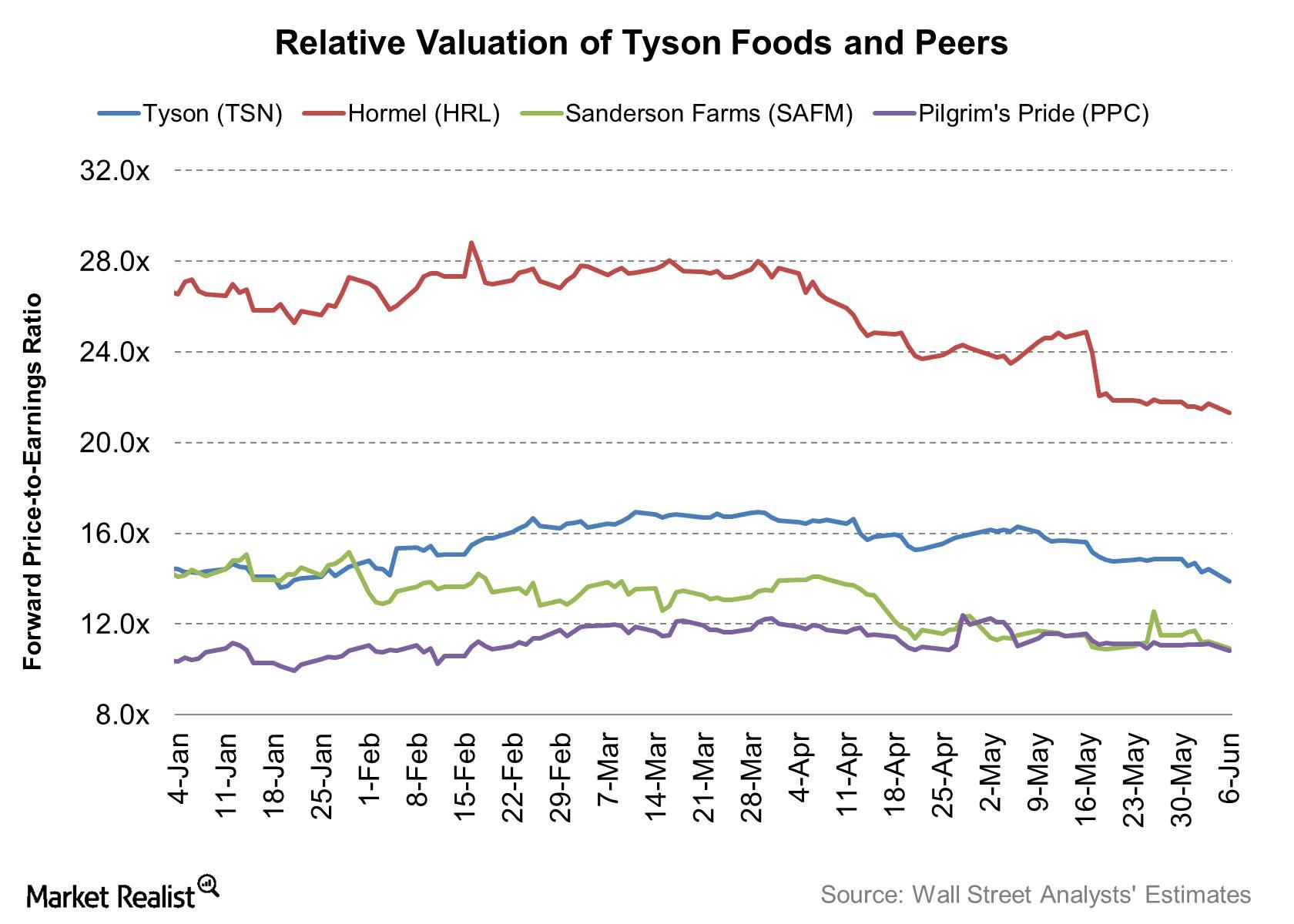 BMO downgraded Tyson on the basis of its current valuation. Let’s explore Tyson’s valuation based on its forward PE (price-to-earnings) ratio. A forward PE valuation multiple indicates how much an investor is willing to pay for the company’s EPS (earnings per share) for the next four quarters. It’s measured by calculating a company’s current price over its EPS estimates for the next four quarters.

Tyson’s valuation started increasing in fiscal 2016 due to its tremendous growth in earnings. As of June 7, 2016, Tyson Foods is trading at a PE ratio of 13.8x. It started declining with a fall in share price after the second quarter results. Pilgrim’s Pride (PPC) and Sanderson Farms (SAFM) are trading at a lower PE of 10.7x and 10.8x, respectively.

Tyson’s management is optimistic about the future. After its 2Q16 results, it raised its EPS guidance for fiscal 2016 to $4.20–$4.30. This came on the back of strong results for the quarter and a positive outlook for fiscal 2016. The company also raised its segment-related guidance. It now expects better operating margins from the chicken and prepared foods segments, with beef and pork generating normal operating profits.

Wall Street estimates for earnings growth increased 10% after the company’s fiscal 1Q16 results. Analysts now expect a 37% increase in earnings for fiscal 2016. However, when compared to Hormel Foods (HRL), which is trading at the highest PE ratio of 21.5x, Tyson is trading lower. This can be justified by the fact that Tyson’s revenue is expected to decline 10% in fiscal 2016 due to lower market prices for processed beef, pork, and chicken.

With this strong outlook for 2016, let’s look next at what Wall Street is recommending for Tyson Foods over the next 12 months.