Debt reduction is a positive

AngloGold Ashanti (AU) is the lowest-cost South African gold miner. Its AISC (all-in sustaining costs) for 1Q16 was $860 per ounce, a 7% improvement year-over-year. Its financial leverage, on the other hand, is the highest among its South African peers.

The company is making serious efforts to reduce its debt. Better prospects ahead are making the company worthy of serious consideration for some investors. 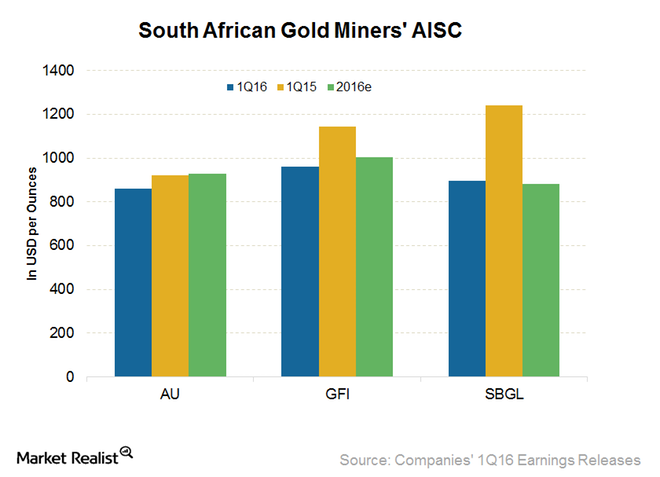 Sibanye Gold (SBGL) has higher costs than many other gold miners (GDX). A major reason for this is its use of more labor-intensive technology, which the South African government promotes. Most of Sibanye Gold’s growth options are in its recent platinum acquisitions. Execution on that front could guide the future course of action of Sibanye stock from a fundamental point of view.

Harmony Gold (HMY) is also a higher-cost producer. It has shifted to providing semiannual results, so information on its AISC for 1Q16 isn’t available. Its AISC for 4Q15 was $950 per ounce.

The key to the company’s long-term production growth is its Golpu project. While financing for the project isn’t yet completed, any positives would be beneficial to the stock.

Gold Fields’ (GFI) productivity rose after it spun off its South African operations, which were relatively more labor-intensive. Its AISC came in at $961 per ounce for 1Q16, which is high compared to the metrics of its peers.

The main investor concern is the problem with the ramp-up of its South Deep operation in South Africa. The company has invested ~$4.2 billion in this asset since its acquisition in 2006. It’s now expecting South Deep to achieve a break-even level by the end of 2016. If achieved, the company could see production growth and cost improvements, which could be a potential catalyst for its stock.

In the next part, we’ll see what analysts are recommending for South African gold miners.