The Reserve Bank of New Zealand (or RBNZ) is scheduled to have its monetary policy meeting on June 9, 2016. The Markets were initially expecting a rate cut of 25 basis points by the RBNZ, but they have revised the forecast.

The revision came after the other Oceania major, the Reserve Bank of Australia (EWA), decided to hold its rate. The Markets are slightly uncertain about what to expect from the RBNZ (VPL), but the broad consensus is that the RBNZ will keep rates unchanged at 2.25%. 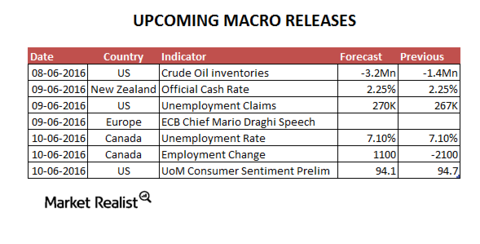 In terms of the major macro data release from the United States (VOO) before the Fed meeting on June 14, 2016, unemployment claims and the University of Michigan’s consumer sentiments will be watched closely. The unemployment claims report is scheduled to be released on June 9, 2016.

After the rather dismal non-farm payrolls release on Friday, June 3, 2016, anything short of a decent unemployment claims report will decrease the bets of a rate hike at the Fed meeting. The University of Michigan consumer sentiment is expected to be below the previous month’s figure, with the Markets expecting it to come in at about 94.1.

Eurozone is calm ahead of the ECB chief’s speech

The lack of a major data release from the European (DBEU) (EZU) front has meant that the euro-to-US-dollar currency pair has been trading range-bound. The next major swing in the currency pair could come from ECB (European Central Bank) chief Mario Draghi’s speech on June 9, 2016.

The Markets aren’t expecting any major comments from Draghi on the monetary policy until the Fed’s policy decision. But if he makes any major statement, volatility could return to the euro-to-US-dollar currency pair.