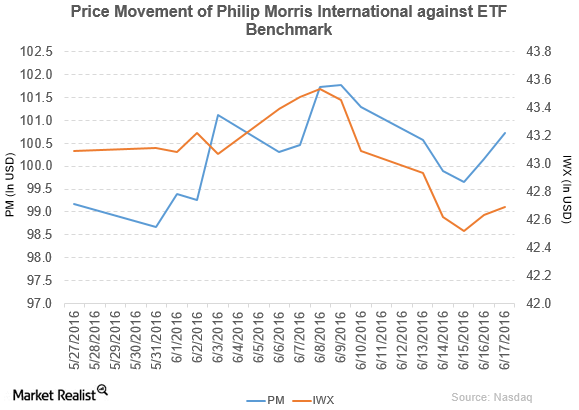 The iShares Russell Top 200 Value ETF (IWX) invests 0.99% of its holdings in Philip Morris. The ETF tracks an index of US large-cap value stocks. The index selects from stocks ranked 1–200 by market cap based on two style factors. The YTD price movement of IWX was 2.3% on June 8, 2016.

The market caps of Philip Morris’s competitors are as follows:

JPMorgan Chase has upgraded Philip Morris’s rating to “overweight” from “neutral” and set the stock price target at $112 per share.

Philip Morris International has declared a regular quarterly dividend of $1.02 per share on its common stock. The dividend will be paid on July 11, 2016, to shareholders of record at the close of business on June 23, 2016.

These projections do not include the impact of future acquisitions, unanticipated asset impairment and exit cost charges, future changes in currency exchange rates, or any unusual events. In the next part of this series, we’ll discuss GoPro.