In 1Q16, Denbury Resources’ (DNR) EV-to-adjusted EBITDA (enterprise value to earnings before interest, tax, depreciation, and amortization) ratio was ~5x, which was lower compared to its historical average of ~6x over the last five years.

DNR’s EV-to-EBITDA ratio was higher in 1Q16, mainly due to its increased EV and a much steeper fall in its EBITDA in the same period. 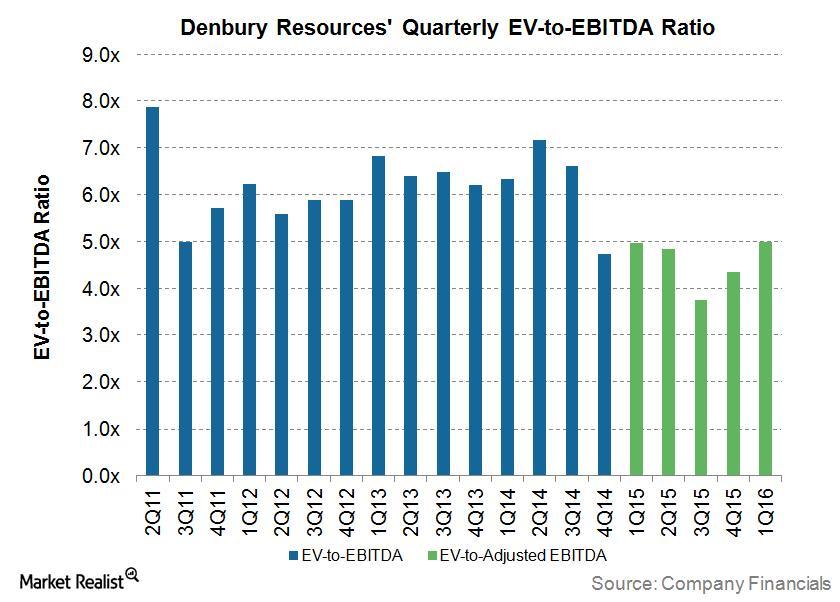 Other upstream companies within the S&P 500 (SPY) such as Occidental Petroleum (OXY), Pioneer Natural Resources (PXD), and Murphy Oil (MUR) have enterprise multiples of ~12x, ~17x, and ~6.9x, respectively.

Denbury Resources’ forward EV-to-EBITDA multiple is ~13x, which is higher than its own historical average of 6x. For 2016, Wall Street analysts estimate Denbury Resources’ EBITDA to be ~62% lower YoY (year-over-year) at ~$350 million.

The EV-to-EBITDA ratio is also called the enterprise multiple, and it’s preferred over the PE (price-to-earnings) ratio, especially for upstream companies, because it takes into account a company’s debt.

In the enterprise multiple, enterprise value is the summation of market capitalization and market value of debt minus total cash and cash equivalents.