Amazon (AMZN) has traditionally depended on its fulfillment centers to store goods and then deliver them to customers. The fulfillment cost for Amazon has continued to grow at a rapid rate. As the chart below shows, the year-over-year growth rate of this cost has increased consistently from 19% in 1Q15 to 34% in 1Q16. Although Amazon managed to achieve a revenue growth rate of 23% in the last quarter, the fulfillment cost growth of 34% needs some analysis.

Fulfillment centers allow sellers to sell their products under the fulfillment by Amazon (or FBA) program. The company considers FBA an important growth driver, as it provides customers with a variety of products to select from. Selection growth makes Amazon’s Prime program more valuable to customers. 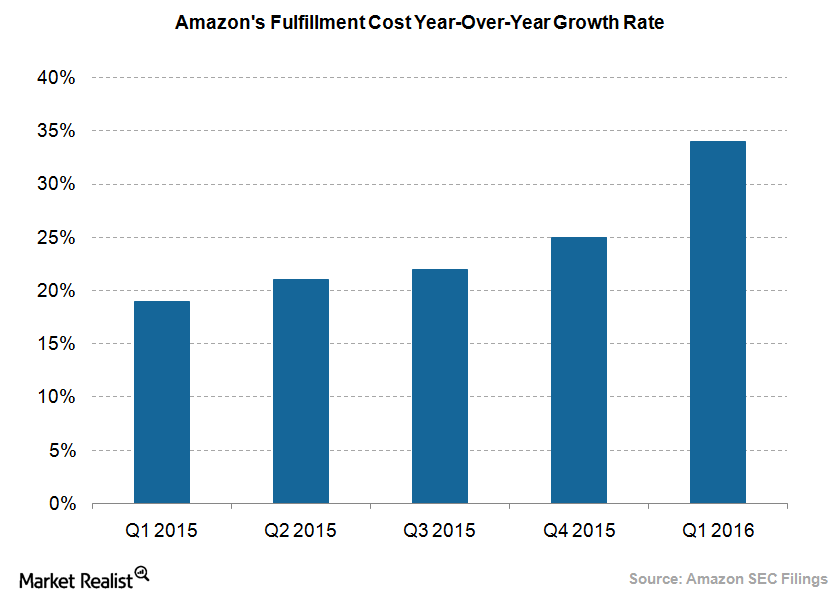 Last year during the holiday season, Amazon faced the nice-to-have problem of greater demand from customers for online purchases and greater demand for space from sellers to store their goods in fulfillment centers. This raised the fulfillment cost for the company. Despite these problems, the company didn’t face any major operational issues during the holiday season.

However, many retailers like Target (TGT) and Walmart (WMT) reported website problems during Thanksgiving weekend last year, according to a report from Retail Dive. The report mentioned that Target’s website crashed on Cyber Monday while Walmart’s website experienced slowdowns during the Black Friday weekend. Even PayPal’s (PYPL) users experienced a slowdown while conducting online payments.

To mitigate this problem, Amazon plans to grow its fulfillment capacity before this year’s holiday season. It has opened new fulfillment centers in a number of US (SPY) states such as California, Texas, New Jersey, and Illinois in the last few months.