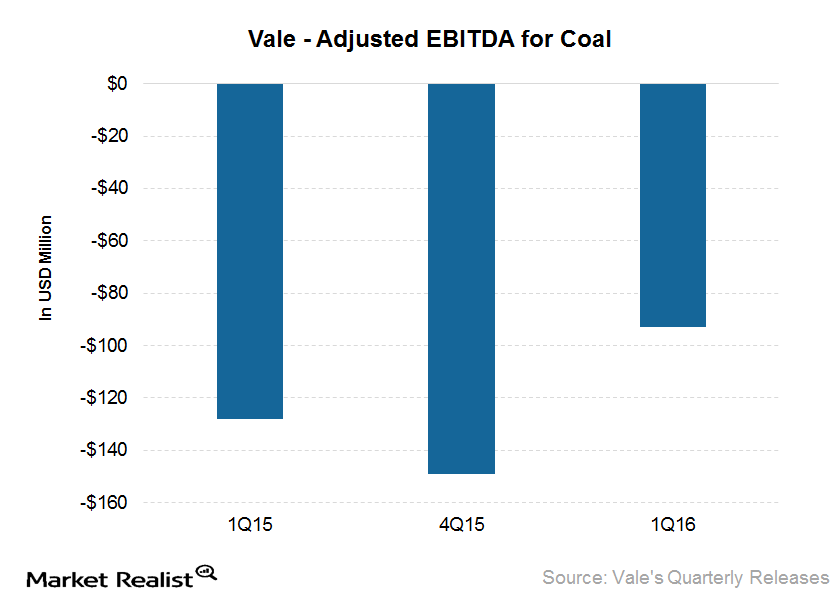 Vale’s Carborough Downs in Australia reached its second-highest quarterly output at 763,000 tons in 1Q16, driven by good operational performance. This helped the company offset lower production at its Moatize operation.

Profitability is up slightly

Vale’s adjusted EBITDA (earnings before interest, taxes, depreciation, and amortization) was -$93 million compared to -$149 million in 4Q15. The sequential improvement is mainly due to lower costs. Because of the ramp-up of the Nacala Logistics Corridor, costs declined by $45 million QoQ. Additionally, sound operational performance in Australia led to a decline of $108 million sequentially in 1Q16.

During the company’s earnings call, Vale maintained that it’s focusing on reducing costs, increasing profitability, and ramping up Nacala. By ramping up Nacala, the company is looking at shipments over 14 million tons in 2016. Since the ramp-up is going well and there’s available inventory, the company expects to reach its targets.

Increased supply coupled with weak demand has led many US coal companies (QQQ) to file for bankruptcy. Other coal producers (KOL) such as Peabody Energy (BTU), Arch Coal (ACI), and Cloud Peak Energy (CLD) are also working to reduce costs to weather this downturn.

In the next part of this series, we’ll see how Vale’s base metals division is doing.