In the previous part of this series, we saw that self-driving cars offer strong growth opportunity for NVIDIA (NVDA). A self-driving car is a complex technology and requires an immense amount of processing speed and computing power. This is possible through deep learning and AI (artificial intelligence).

Let’s see how NVIDIA plans to replicate its business model in the automotive space. 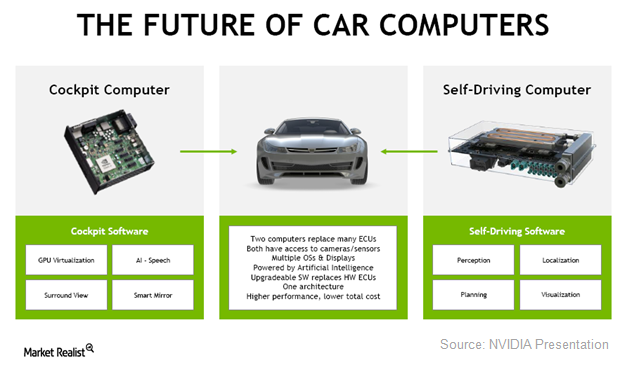 At present, ECUs (electronic control units) are integrated into the cars incrementally. This has resulted in multiple ECUs, each with its own processor, software, and upgrades.

This has created the problem of the ballooning cost of maintaining the software. NVIDIA looks to solve this problem using its platform and leverage approach.

NVIDIA aims to replace all the ECUs with two computing systems built on the same architecture, called NVIDIA DRIVE. Both systems would have access to cameras and sensors so the software can be upgraded and run on either of the two systems.

NVIDIA plans to solve the problem of high cost of software maintenance by installing upgradable software in both systems. The computing systems must have a higher performance to allow loading of software applications. Having the same architecture and an open platform for all developers would enable carmakers to put more processing into the car without incurring a huge cost.

NVIDIA’s DRIVE CX is a cockpit computer that would run infotainment in the car. As the system would have access to cameras and sensors, it can be scaled to include ADAS (advanced driver assistance systems) applications such as object detection, classification, surround view, and a surround mirror. All these applications are upgradable, which could reduce the cost of the software.

NVIDIA’s DRIVE PX 2 is a self-driving computer that would take care of planning, visualization, localization, and perception. The system would be scalable from one processor to many systems, and it would be powered by artificial intelligence.

NVIDIA is working with over 50 automakers, including Ford (F) and Fiat Chrysler (FCAU) on their self-driving car projects. Volvo is believed to be the first to adopt the PX2 platform and use it in 100 autonomous sports utility vehicles by 2017.

Even Google (GOOG) is working on its self-driving car and is currently testing it in four cities. The SPDR S&P 500 ETF (SPY) has investments in S&P 500 stocks, including 0.10% in NVDA.