Noble Energy’s (NBL) net debt to EBITDA (earnings before interest, tax, depreciation, and amortization) has mostly been rising since 1Q15 as a result of its declining EBITDA. The company’s net debt to adjusted EBITDA was mostly under 2x until 2Q15, but it’s currently trading at ~3.4x. 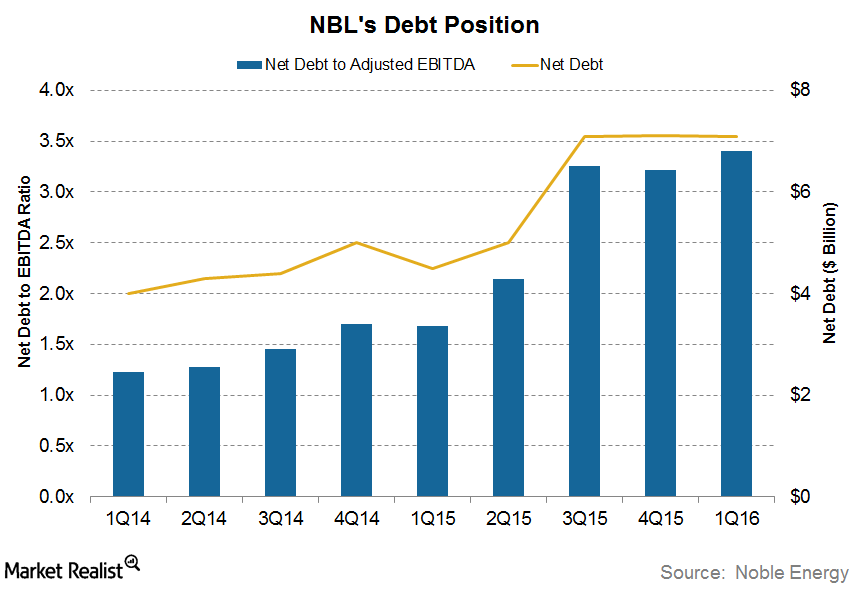 In comparison, upstream companies such as Cabot Oil and Gas (COG) and EQT (EQT) saw lower EBITDA levels due to lower crude oil prices (USO). Their respective 1Q16 EBITDAs for the trailing 12 months fell by 53.3% and ~54.3%, respectively. On the other hand, Antero Resources (AR) saw its trailing-12-month EBITDA for 1Q16 rise by ~1%. Together, these companies make up 8.6% of the iShares U.S. Oil & Gas Exploration & Production ETF (IEO).

Noble Energy noted that it had $953 billion in cash and cash equivalents as of March 31, 2015. It also has $4 billion from an unused credit facility.

Continue to the next part to read about NBL’s free cash flow trends.