Norfolk Southern (NSC) is a major freight rail carrier in the eastern US. NSC’s overall railcars declined by 9% YoY (year-over-year) in the week ending May 21, 2016. Total railcars were just above 67,000 units that week, as compared to 73,700 one year previously.

The company’s railcars excluding coal and coke recorded a 2.6% decline YoY. The fall in NSC’s total railcars, when compared with the total US railcar decline, was almost in line with the latest reported week of 2016. 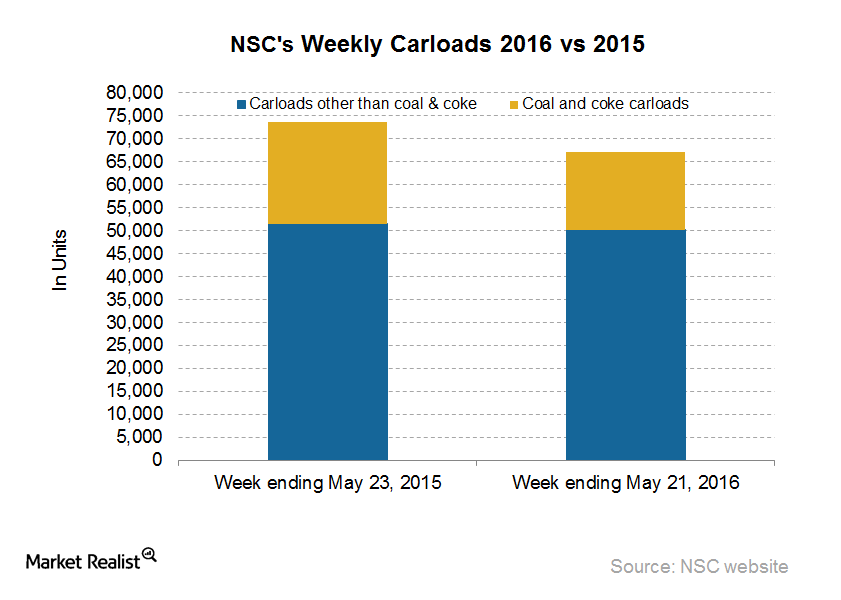 Environmental regulations and the shift from coal-fired electricity to natural gas-based (UNG) electricity in the recent past have impacted coal production across the US. The slowdown in US steel production has also negatively impacted the demand for metallurgical coal. Lower crude oil prices have affected coal producers such as Alliance Resource Partners (ARLP), Peabody Energy (BTU), and CONSOL Energy (CNX). The sharp decline in coal price led BTU to file Chapter 11 bankruptcy protection on April 13.

Investors can consider the iShares Global Industrials ETF (EXI) for investment in the US railroads. US-originated Class I railroads are included in the portfolio holdings of EXI.

In the week ending May 21, 2016, the advancing commodity groups included the following:

In the next part, we’ll check in with Norfolk Southern’s intermodal volumes.