Franco-Nevada (FNV) paid down its entire debt of $460 million during 1Q16. With this, the company is now debt-free. It used the proceeds from the bought deal it completed in 1Q15 (net proceeds of $884 million) to pay down the debt. At the end of 1Q15, it had $176 million in cash, marketable securities of $83 million, and an available credit facility of $1 billion. This is ~$1.3 billion in total liquidity. Given the available liquidity, the company can easily pursue accretive streaming deals in the future. 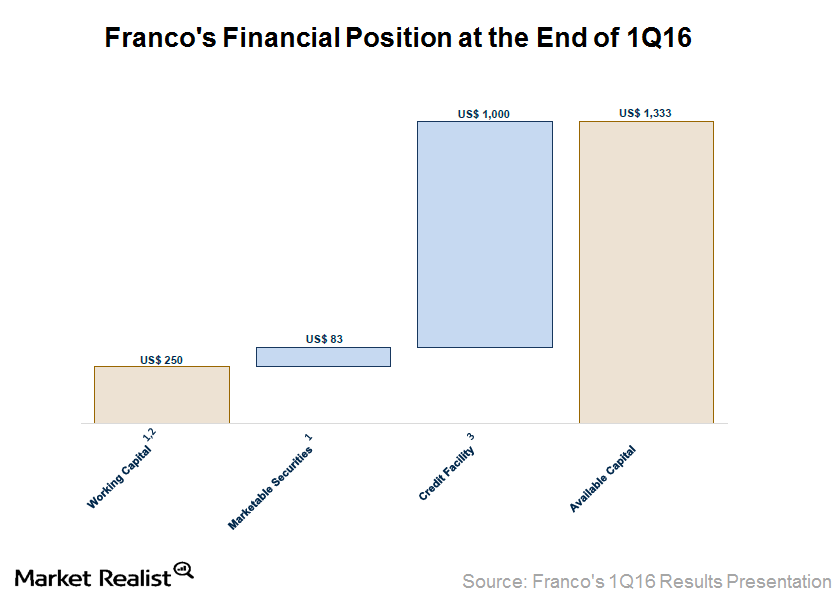 The company announced a 4.8% increase in its quarterly dividend from $0.21 per share to $0.22 per share. This represents a dividend yield of ~1.4%. It’s also the ninth consecutive quarter that the company increased its dividends. Earlier, Royal Gold (RGLD) also announced that it would increase its dividends. It’s against the backdrop of gold miners paring back on costs and dividend cuts. Goldcorp (GG) and Barrick Gold (ABX) announced that they would cut their dividends to conserve cash in the volatile metal price environment.

The company expects to fund $25 million–$35 million of capital expenditure on Cobre Panama in 2Q16. This totals $130 million–$150 million for 2016. Franco-Nevada should be able to fund this capex from its existing cash flows. The company also expects to maintain sufficient capacity to be able to fund streams going forward.

Investors can get exposure to gold by investing in the iShares Gold Trust ETF (IAU) and the SPDR Gold Shares ETF (GLD). Both of the ETFs track gold prices.