Cable Networks’ revenues in fiscal 2Q16 were $3.9 billion, a decline of 2%. Operating income at Cable Networks increased by 12% year-over-year to $2 billion. As you can see in the graph below, Cable Networks comprised 68% of the company’s Media Networks segment revenues, while Broadcasting made up the remaining 32%. 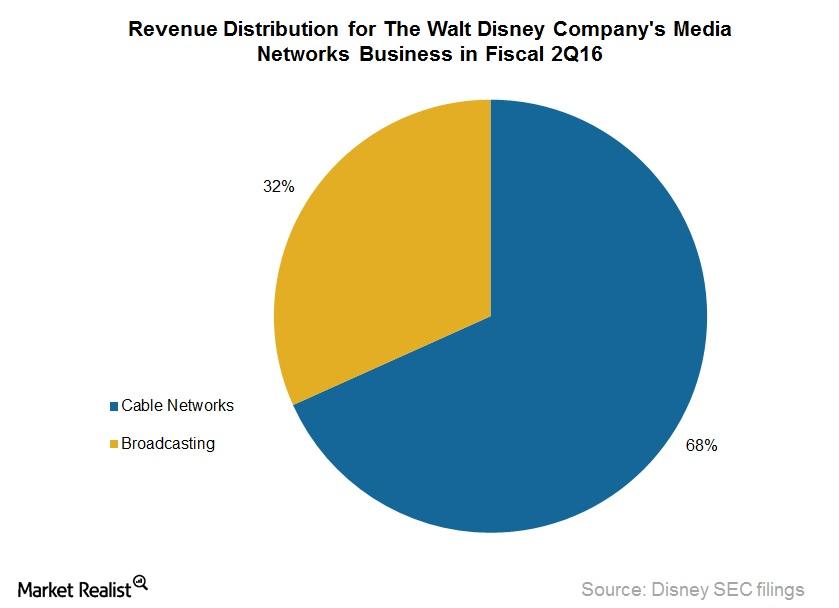 The rise in operating income was a result of lower programming costs at ESPN since the New Year’s Eve and New Year’s Day college football games were aired during fiscal 1Q16. The shift in football games resulted in a decline of 13% for ESPN’s advertising revenues. But Disney stated in its earnings call that in fiscal 2Q16, ESPN’s ad sales have increased by 5% compared to last year.

The company is trying to broaden the reach of ESPN by distributing it across multiple platforms in the United States and in international markets. ESPN is already part of skinny bundles such as Dish Network’s (DISH) Sling TV and Sony’s (SNE) PlayStation Vue. Disney stated in its earnings call that the addition of ESPN to these skinny bundles has resulted in “incremental” subscribers for ESPN in fiscal 2Q16. Disney considers skinny bundles “attractive” products.

Disney also stated that it believes the trend of skinny bundles and the addition of ESPN to these bundles will be a big positive for the company.

In the next part, we’ll look at what effect Disney’s Star Wars and Zootopia had on its quarterly results.