In a typical carry trade, importers in China open a letter of credit (or LC) with foreign banks by paying a portion of the total import costs. Chinese importers then sell the copper and get cash. The typical payment time for LCs is three to six months. This basically means that Chinese importers get access to cheap US dollar funds. The basic premise behind these deals is the arbitrage between interest rates in China and the developed world. 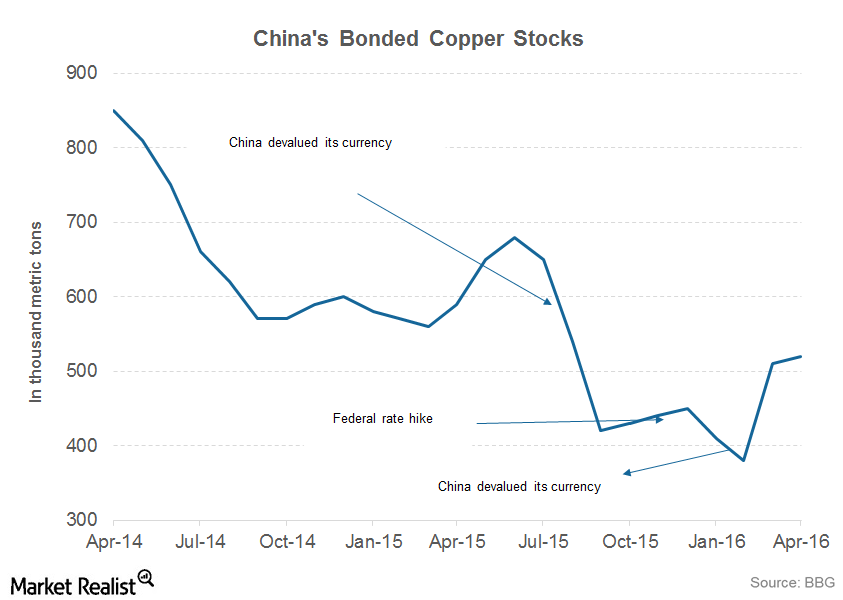 We saw an unwinding of these transactions starting in mid-2015. Since China devalued its currency and cut interest rates several times in a row, carry trades started to become less profitable. The December 2015 rate hike only added fuel to the fire, and China’s bonded stocks fell further after that. However, as the Chinese currency gradually appreciated this year and Fed rate hike expectations started to fade away, we saw bonded copper stocks rise again in China.

Bonded copper stocks, which are held in free-trade zones in China, have risen over the last few months. The data aren’t released officially, but Bloomberg estimates the figure at a whopping 520,000 metric tons as of the end of April. This represents a month-over-month increase of ~2%. Bonded stocks, however, have increased by ~140,000 metric tons since February, as you can see in the graph above.

These bonded stocks could find their way into physical copper markets in case of a rate hike. The unwinding of these carry trades could put pressure on copper prices. Copper producers such as Freeport-McMoRan (FCX), Southern Copper (SCCO), and Rio Tinto (RIO) (TRQ) are negatively impacted by lower copper prices.

Meanwhile, China’s official copper inventory has fallen steeply, which we’ll explore in the next part of the series.

Investors looking at direct exposure to copper can also consider the PowerShares DB Base Metals ETF (DBB). DBB invests one-third of its holdings in copper.