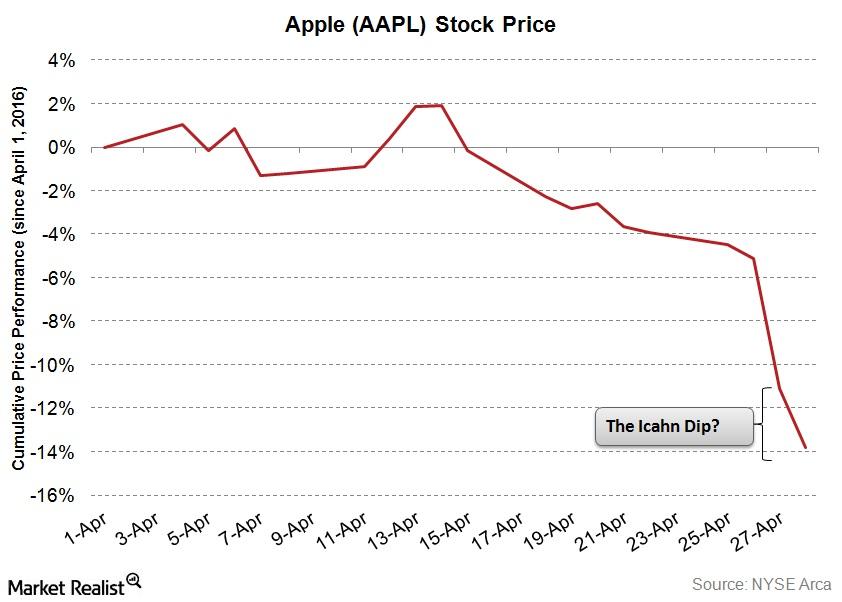 On April 26, Apple reported its earnings for the quarter ending March 2016. According to the earnings report, the company’s sales fell 13% to $50.6 billion. This marked the first decline in iPhone sales and the first revenue drop since 2003. A negative stock market (SPY) (QQQ) reaction was expected. The report ended a streak of 51 quarters of uninterrupted growth in earnings.

Icahn disclosed his stake in the company three years ago in 3Q13. Since then, Icahn has been a huge fan of Apple. He repeatedly calling the investment a “no brainer.”

However, in 4Q15, Icahn offloaded about 7 million Apple shares. This brought Apple’s share in his portfolio down from 20.9% to 16.4%. Icahn started 2016 with about 16.4% of his portfolio invested in Apple. Icahn offloaded the stake due to a perceived slump in sales growth that could occur due to the smartphone market becoming saturated.

On April 28, he stated that “We no longer have a position in Apple,” at an interview with CNBC.

So, what caused the billionaire activist investor to offload the entire stake of a company he likes? Icahn says he’s “worried about China” (YINN) (FXI).