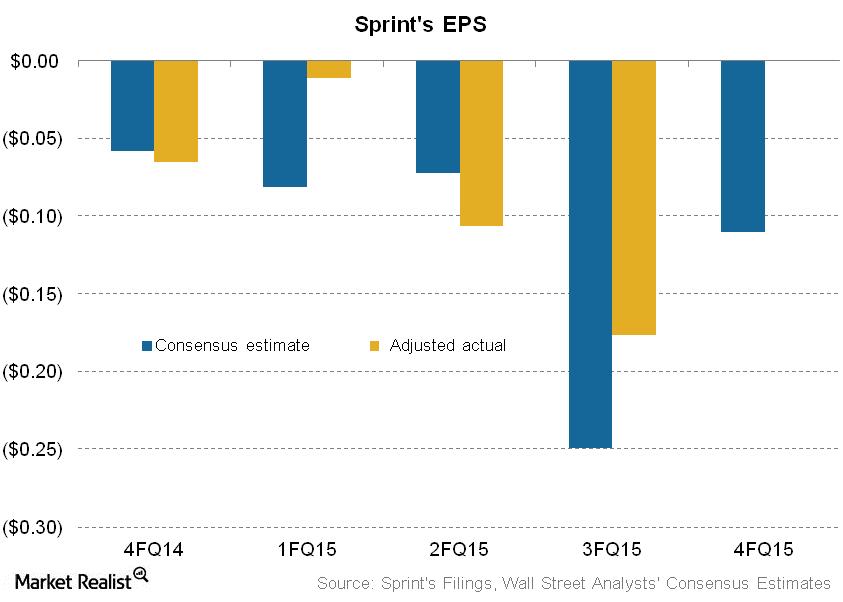 Sprint has been seeing adjusted net losses each quarter since fiscal 2Q14, though its adjusted losses were lower than what analysts anticipated in fiscal 3Q15 and fiscal 1Q15. Still, in this metric, Sprint negatively surprised analysts by higher-than-expected losses in fiscal 4Q14 and fiscal 2Q15.

On the positive side, analysts expect Sprint’s adjusted EBITDA (earnings before interest, tax, depreciation, and amortization) margin to continue to strengthen YoY in fiscal 4Q15. According to the consensus, this margin figure for Sprint is expected to increase from ~21% in fiscal 4Q14 to ~25.7% in fiscal 4Q15.

This margin figure also improved YoY, from ~11.6% in fiscal 3Q14 to ~23.4% in fiscal 3Q15. Note that Sprint’s adoption of leasing plans positively influenced this metric during that quarter, and note that unlike Verizon (VZ) and AT&T (T), T-Mobile (TMUS) and Sprint offer leasing plans.

For a diversified exposure to select telecom companies in the US, you might consider the SPDR S&P 500 ETF (SPY). SPY held ~2.8% in AT&T, Verizon, CenturyLink (CTL), Frontier Communications (FTR), and Level 3 Communications (LVLT) at the end of March 2016.