Falling crude oil (UCO) and natural gas (UGAZ) prices over the last two years have hurt the entire upstream sector. Occidental Petroleum (OXY) is no exception. But since January 2016, as you can see in the above graph, Occidental Petroleum’s stock has been in a new uptrend. It’s clearly making a pattern of higher highs and higher lows. 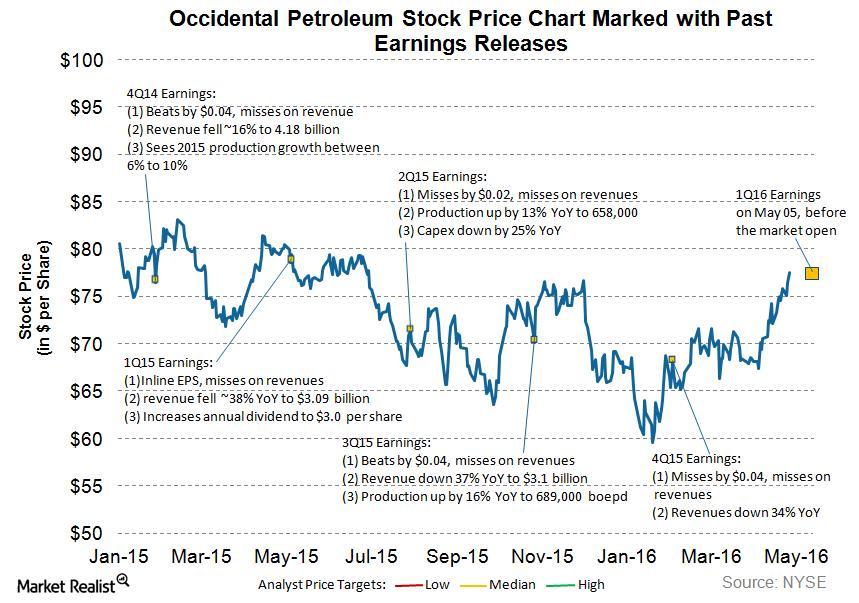 Recently, OXY has shown less relative strength when compared with other crude oil and natural gas producers. In the last three months, Occidental Petroleum’s stock price has increased by ~31%. Compare this with the SPDR S&P Oil and Gas Exploration & Production ETF (XOP), which is up ~56% during the same period. XOP invests at least 80% of its total assets in oil and gas exploration companies. The Direxion Daily S&P Oil & Gas Exp. & Prod. Bull 3x Shares (GUSH) is a leveraged ETF that invests in oil and gas exploration and production companies.

OXY reported its 4Q15 earnings on February 4, 2016. In 4Q15, excluding the one-time items, OXY reported a loss of $0.17 per share, $0.04 lower than the consensus for a loss of $0.13 per share. Following the earnings release, worse-than-expected earnings saw Occidental Petroleum’s stock price decrease by ~4% in four sessions.

For 3Q15 earnings, OXY reported a profit of $0.03 per share, $0.04 better than the consensus for a loss of $0.01 per share. Following the earnings release, better-than-expected earnings saw OXY’s stock price increase by ~9% in just five sessions.

A similar upward reaction was also observed after the company’s 4Q14 earnings when OXY’s stock price increased by ~10% in two weeks after beating the consensus earnings estimates by $0.04 per share.

In contrast to the above two occasions, OXY’s 1Q15 and 2Q15 post-earnings reactions were negative.